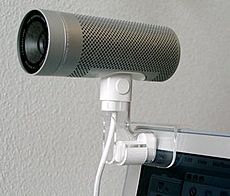 A webcam is a video camera that connects to a computer, and can let people see each other over the Internet. Most people that have webcams use them with an instant messenger to see each other at the same time. Webcams can also be used for recording videos and video blogs. The webcam can be part of a computer, mobile phone or it can be an independent device.

The first webcam was developed in 1991 at Cambridge University and the first commercial camera started in 1994 and was made by Logitech.

All content from Kiddle encyclopedia articles (including the article images and facts) can be freely used under Attribution-ShareAlike license, unless stated otherwise. Cite this article:
Webcam Facts for Kids. Kiddle Encyclopedia.