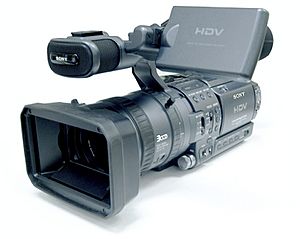 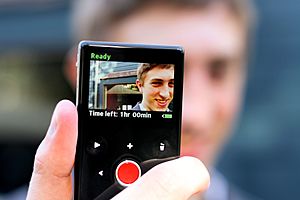 Video cameras were invented early in the 20th century for television use, and by the end of the century, people could buy digital video cameras, which can almost immediately display the image. Video recorders that could record the image on magnetic tape were created in the middle 20th century.

At first, video cameras were large and expensive. Only professionals operated them. As the electronics industry advanced, and solid state circuits with transistors and microprocessors replaced vacuum tubes, video cameras became smaller and inexpensive. Now many mobile phones and other consumer electronic devices include video cameras. In addition, software is now widely available to edit or to compress the output from video cameras.

Modern video cameras have numerous designs and uses, not all of which resemble the early television cameras.

Special uses of video cameras include systems that capture images at the finish line to time races and sporting events. Some toll roads use video cameras to make pictures of the license plate of any car that fails to pay tolls. Computers then identify the drivers and mail enforcement letters to collect the missed tolls.

All content from Kiddle encyclopedia articles (including the article images and facts) can be freely used under Attribution-ShareAlike license, unless stated otherwise. Cite this article:
Video camera Facts for Kids. Kiddle Encyclopedia.