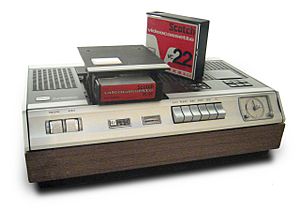 Early consumer VCR in a museum

Videocassette recorder (VCR) is an electronic device that records and plays videotapes. Most use VHS or Beta cassettes that contain recordings of movies and other programs (such as music videos, exercise videos, and so on). To watch a recording using a VCR, the VCR has to be connected to a television set.

VCRs at first were mainly used to record programs from television broadcasts. Throughout the 1980s and 1990s, many people used VCRs to record their favorite television shows to watch them later. This was called time-shifting.

In the mid-1980s, VCRs became a very popular way for people to watch movies and other recorded programs on their home television. Until the 21st century, video rental stores offered a large selection of movies recorded on VHS tapes that customers could rent. In the 1980s, some video rental stores also offered a smaller number of movies recorded on Beta tapes.

In the 1980s, VHS was involved in a format war with Sony's Betamax. VHS won the format war. Betacam, a variant of Betamax designed specifically for professional camcorders, did become popular in television studios, but consumers used VHS at home.

In 1974, the Japanese government's Ministry of International Trade and Industry (MITI) tried to force the Japanese video industry to agree on just one home video recording format, in order to avoid consumer confusion. Later, Sony built a prototype of a Betamax VTR. Sony presented the prototype to MITI, and convinced them to use Betamax as the technical standard. Sony was then allowed to charge other companies licensing fees to use the Betamax technical standard, so that they could also build and sell Betamax machines.

JVC believed that an open standard (a technical standard that is open and free for anyone to use) like VHS was better for the consumer, so they fought against the MITI and Sony. JVC attempted to convince other companies, including Matsushita, to use VHS instead of Betamax. Matsushita agreed with JVC because Matsushita worried that Sony might become the most powerful company in the video recording industry if the Betamax format was the only one that the MITI allowed them to sell. Matsushita also disliked the fact that Betamax systems could only record one hour of video.

Because Matsushita agreed with JVC, Hitachi, Mitsubishi, and Sharp began to support the VHS technical standard. When Sony released its Betamax machines in Japan in 1975, it pressured the MITI to support Sony even more. However, the combination of JVC and the other companies was much stronger, and eventually the MITI stopped trying to create a single technical standard for the whole industry. JVC released the first VHS machines in Japan in late 1976, and then in the United States in early 1977. Sony continued to sell Betamax machines, and they competed with VHS throughout the late 1970s and into the 1980s.

In countries that use the NTSC technical standard for television broadcasting, the Beta I version of Betamax was able to record one hour of video at a tape speed of 1.5 inches per second (ips), which was similar to a VHS standard-play mode (SP). Originally, VHS recorded two hours of video at 1.31 ips. Betamax's smaller-sized cassettes were not able to contain as much magnetic tape as VHS cassettes. They could not compete fit longer lengths of tape into the cassettes to match VHS's two-hour recording time. Instead, Sony had to slow the tape speed down to 0.787 ips (Beta II) in order to reach two hours of video recording in the same cassette size. This meant that the television picture produced by a Betamax tape was worse than VHS when comparing two-hour recordings. Sony eventually released a longer Betamax cassette called Beta III which allowed NTSC Betamax to record more than two hours, but by then VHS had already won the format war.

In countries that use the PAL and SECAM technical standards for their television broadcasting, Betamax's recording time was similar to VHS and the picture on the television was at least as good as VHS.

In the late 1990s and throughout the 2000s, the DVD player replaced the VCR as the most common way to watch movies on a home television. The VCR sales dropped later, causing the VCR to be used less by people. VCRs are still available, but fewer stores offer them, because fewer people want them.

All content from Kiddle encyclopedia articles (including the article images and facts) can be freely used under Attribution-ShareAlike license, unless stated otherwise. Cite this article:
Videocassette recorder Facts for Kids. Kiddle Encyclopedia.