Victor Company of Japan, Ltd usually referred to as JVC or The Japan Victor Company, is a Japanese international professional and consumer electronics corporation based in Yokohama. Founded in 1927, the company is best known for introducing Japan's first televisions and for developing the Video Home System (VHS) video recorder.

From 1953 to 2008, Matsushita Electric Industrial Co., Ltd. was the majority stockholder in JVC. In 2008, JVC merged with Kenwood Corporation to create JVC Kenwood Holdings.

JVC was founded in 1927 as "The Victor Talking Machine Company of Japan, Limited," In the 1930s, JVC produced phonographs and records. In 1932, JVC began producing radios, and in 1939 Japan's first locally-made television. Today the record company in Japan is known as Victor Entertainment.

In 1970, JVC marketed the Videosphere, a portable cathode ray tube (CRT) television inside a space-helmet-shaped casing with an alarm clock at the base. It was a commercial success.

In 1971, JVC introduced the first discrete system for four channel quadraphonic sound on vinyl records. In 1975, JVC introduced the first combined portable battery-operated radio with inbuilt TV, as the model 3050. The TV was a 3-inch (7.6 cm) black-and-white cathode ray tube. One year later, JVC expanded the model to add a cassette-recorder, as the 3060, creating the world's first boombox with radio, cassette and TV. 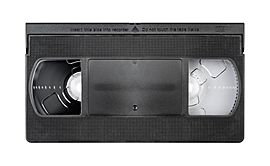 In the late 1970s, JVC developed the VHS format, introducing the first VHS recorders to the consumer market in 1976 for the equivalent of US $1060. Sony, which had introduced the Betamax home videocassette tape a year earlier, became the main competitor for JVC's VHS format into the 1980s, creating the videotape format war. 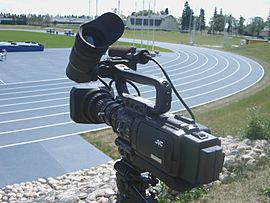 The Betamax cassette was smaller, with slightly superior picture quality to the VHS cassette, but this resulted in Betamax having less recording time. The two companies competed fiercely to encourage others to adopt their format, but by 1984 forty companies were using JVC's VHS format, while only 12 used Betamax. Sony began producing VHS recorders in 1988 and after 1993 stopped making Betamax recorders for the US market, and then completely in 2002.

In October 2001, the National Academy of Television Arts and Sciences presented JVC an Emmy Award for "outstanding achievement in technological advancement" for "Pioneering Development of Consumer Camcorders". Annual sponsorships of the world-renowned JVC Tokyo Video Festival and the JVC Jazz Festival have helped attract the attention of more customers.

All content from Kiddle encyclopedia articles (including the article images and facts) can be freely used under Attribution-ShareAlike license, unless stated otherwise. Cite this article:
JVC Facts for Kids. Kiddle Encyclopedia.