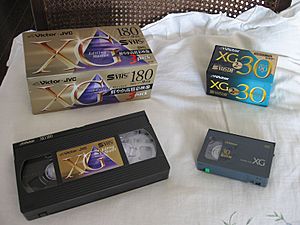 VHS means Video Home System. This system uses a videocassette tape to record video and sound, which can be watched on a television. A DVD/VHS combo can record (write) on VHS tapes, read off VHS tapes, and additionally, read from DVD discs. A few can also record on DVD. VHS was so popular that during the 1990s, the terms "videocassette", "videotape", or even just "video" usually referred to the VHS format.

VHS cassettes can be recorded using a video camera. They can also be recorded with a videocassette recorder, or VCR. A VCR can use a VHS cassette to record broadcast television.

This system was created in 1976 by the Victor Company of Japan (also called JVC). VHS was a very popular way for people to record and play video at home in the 1980s and 1990s, but now DVD (Digital Versatile Disc) and Blu-ray have become more popular as they can be easier to use, the quality is higher, they last longer, and the discs and players are cheaper to make. VHS VCRs, as well as blank tapes and pre-recorded VHS movies, are no longer made, except for a few independent films. Blank tapes are still widely available as new old stock.

While Kenjiro Takayanagi, a television broadcasting pioneer, was the vice president of JVC, he decided that his company could make money by developing and selling VTRs in Japan, and at a lower price. In 1959, JVC developed a two-head video tape recorder, and by 1960 they had a color television version for professional broadcasting. In 1964, JVC released the DV220. It would be the company's standard VTR until the mid-1970s.

In 1969, JVC worked with Sony Corporation and Matsushita Electric (who owned Panasonic) to design a video recording technical standard for Japanese consumers. They developed the U-matic tape format in 1971, which was the first format to become a technical standard for VTRs. The U-matic format was successful in business and some video broadcasting. However, few people bought U-matic VTRs to use at home because they were still very expensive, and the tapes could only record short time periods of video.

In 1971, JVC engineers named Yuma Shiraishi and Shizuo Takano started a team to develop a VTR for people to use at home. By the end of 1971, they created an diagram titled "VHS Development Matrix", which listed goals for JVC's new VTR.

In 1972, video recording industry in Japan started to lose money. JVC had to find ways to spend less money, so it stopped developing the VHS project. However, Takano and Shiraishi continued to work on the project by themselves, even though the company was not giving them any money to use. By 1973, the two engineers had built a prototype.

All content from Kiddle encyclopedia articles (including the article images and facts) can be freely used under Attribution-ShareAlike license, unless stated otherwise. Cite this article:
VHS Facts for Kids. Kiddle Encyclopedia.