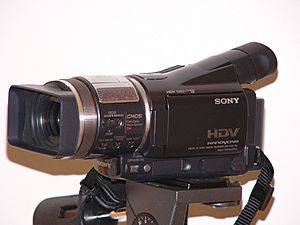 In order to differentiate a camcorder from other devices that are capable of recording video, like mobile phones and digital compact cameras, a camcorder is generally identified as a portable, self-contained device having video capture and recording as its primary function.

The earliest camcorders employed analog recording onto videotape. Tape-based camcorders use removable media in the form of video cassettes. Nowadays, digital recording has become the norm, with tape being gradually replaced with other storage media such as internal flash memory, hard drive and SD card. As of January 2011, none of the new consumer-class camcorders announced at the 2011 International Consumer Electronics Show record on tape.

Camcorders that do not use magnetic tape are often called tapeless camcorders, while camcorders that permit using more than one type of medium, like built-in hard disk drive and memory card, are sometimes called hybrid camcorders.

Camcorders contain 3 major components: lens, imager, and recorder. The lens gathers and focuses light on the imager. The imager (usually a CCD or CMOS sensor on modern camcorders; earlier examples often used vidicon tubes) converts incident light into an electrical signal. Finally, the recorder converts the electric signal into video and encodes it into a storable form. More commonly, the optics and imager are referred to as the camera section.

The lens is the first component in the light path. The camcorder's optics generally have one or more of the following adjustments:

In consumer units, the above adjustments are often automatically controlled by the camcorder's electronics, but can be adjusted manually if desired. Professional units offer direct user control of all major optical functions.

The imager converts light into electric signal. The camera lens projects an image onto the imager surface, exposing the photosensitive array to light. The light exposure is converted into electrical charge. At the end of the timed exposure, the imager converts the accumulated charge into a continuous analog voltage at the imager's output terminals. After scan-out is complete, the photosites are reset to start the exposure-process for the next video frame.

The recorder is responsible for writing the video-signal onto a recording medium (such as magnetic videotape.) The record function involves many signal-processing steps, and historically, the recording-process introduced some distortion and noise into the stored video, such that playback of the stored-signal may not retain the same characteristics/detail as the live video feed.

All content from Kiddle encyclopedia articles (including the article images and facts) can be freely used under Attribution-ShareAlike license, unless stated otherwise. Cite this article:
Camcorder Facts for Kids. Kiddle Encyclopedia.