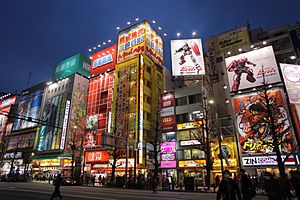 The Akihabara electric town at night.

Akihabara is a district of Chiyoda, Tokyo. It is known for its stores which feature electronics and anime products. It is also famous for Yodobashi Camera.

In 2009, Akihabara was recognized as one of the 100 Landscapes of Japan which best show contemporary Japan and its culture in the Heisei period. .

Its name is often shortened to Akiba in Japan. Akihabara is a major shopping area for electronic, computer, anime, games and otaku goods. In this place, new and used items can be gotten. New items are mostly to be found on the main street, Chūōdōri, with many kinds of used items found in the back streets of Soto Kanda 3-chōme

As mentioned, Akihabara is famous as electric town.

After World War II, a black market at Kanda developed. And what began as a host of electrical stores selling radio goods or some electronic component has today come to be known as Electric Town.

Consumer electronics such as a TV or washing machine is one of the products sold in Akihabara for a long time. These days, because of intense price competition, mid or small-scale electrical appliance shops have decreased and large retail electrical appliances store came to be outstanding. However, the shops treating a lot of consumer electrionics for foreign countries are prosperous by foreign tourists.

All content from Kiddle encyclopedia articles (including the article images and facts) can be freely used under Attribution-ShareAlike license, unless stated otherwise. Cite this article:
Akihabara Facts for Kids. Kiddle Encyclopedia.