Kids Encyclopedia Facts
Not to be confused with mango. 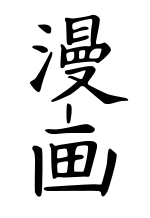 The kanji for "manga" from Seasonal Passersby (Shiki no Yukikai), 1798, by Santō Kyōden and Kitao Shigemasa 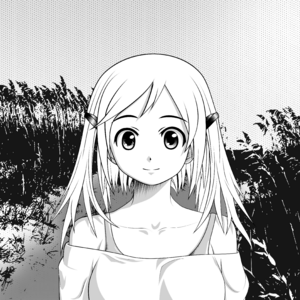 A figure drawn in manga style. Typically reduced to black and white and different patterns to compensate the lack of colors. 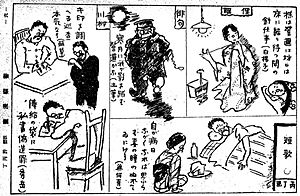 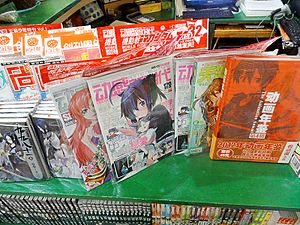 A manga (Japanese: 漫画) is a Japanese comic book.

Manga is drawn by a mangaka (Japanese: 漫画家) (Japanese for cartoonist: an artist of comics). Manga is usually read from right to left.

The word manga can be both singular and plural, and mean both the medium of comics or a single comic. It is a form of art that is used to draw comics and develop Anime (animated cartoons of manga art). Colors and symbols are important.

All content from Kiddle encyclopedia articles (including the article images and facts) can be freely used under Attribution-ShareAlike license, unless stated otherwise. Cite this article:
Manga Facts for Kids. Kiddle Encyclopedia.