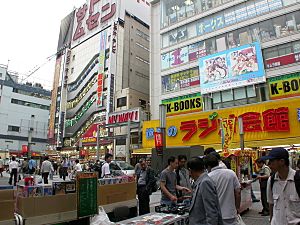 The Akihabara neighborhood of Tokyo, a popular gathering site for otaku 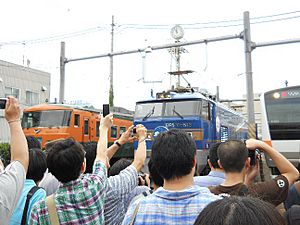 Otaku is a Japanese slang word which means someone who has a hobby that they spend more time, money, and effort on than normal people do. They know a lot about their hobby and things related to it; for example, an anime otaku might spend a lot of time watching anime, buy a lot of DVDs and other products, learn about the people who create anime (such as the people who draw it, or the people who make the voices of the characters), or create something (like music or drawings) about anime. Originally, otaku was a word to speak to someone from another family with respect.

In Japan, otaku is generally considered a rude word. Calling someone an otaku in Japan would be a very bad insult. However, in America, otaku is often used to refer to fans of anime and manga. In America, calling someone an otaku is not necessarily rude. In Australia the term "otaku" is seen not only as not rude but in a lot of anime fans' cases as a thing to be very proud of being called. The term "otaku" is used to mean a very knowledgeable geek, obsessed with anime; an extreme fan of anime and manga.

All content from Kiddle encyclopedia articles (including the article images and facts) can be freely used under Attribution-ShareAlike license, unless stated otherwise. Cite this article:
Otaku Facts for Kids. Kiddle Encyclopedia.