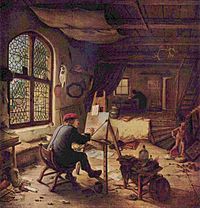 A studio is a place where an artist can work. Studios can be used for many things, such as making photos, movies, television shows, cartoons, or music. The word comes from the Latin word, studium, which means to eagerly want something.

A music studio is a room or group of rooms that are used for practicing music. Most music studios have a piano and a mirror.

A recording studio is used for recording music, speech, or other kinds of sound. Many recordings become works of art in themselves.

All content from Kiddle encyclopedia articles (including the article images and facts) can be freely used under Attribution-ShareAlike license, unless stated otherwise. Cite this article:
Studio Facts for Kids. Kiddle Encyclopedia.