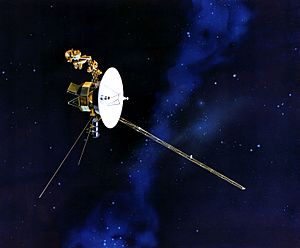 A space probe is an unmanned space mission, usually a small spacecraft sent out to find out information about a planet or other far away thing. As a tool of space exploration a planetary probe may land on the planet, or orbit around it, or merely fly by closely. Probes use radio waves to send information back to Earth or sometimes to a manned spacecraft. A space observatory leaves the Earth to look at distant objects, but does not go near the objects, so it is not called a "probe".

The space agencies of the USSR (now Russia and Ukraine), the United States, the European Union, Japan, China, India, and Israel have collectively launched probes to several planets and moons of the Solar System, as well as to a number of asteroids and comets. Approximately 15 missions are currently operational.

All content from Kiddle encyclopedia articles (including the article images and facts) can be freely used under Attribution-ShareAlike license, unless stated otherwise. Cite this article:
Space probe Facts for Kids. Kiddle Encyclopedia.