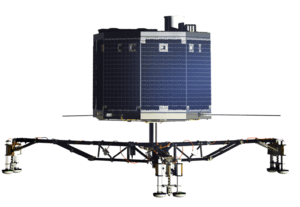 Philae (before known as RoLand) is an ESA lander spacecraft. It went with the Rosetta spacecraft. It landed on comet 67P/Churyumov–Gerasimenkoon on 12 November 2014 to analyze it.

The name Philae was chosen through a contest organized by ESA, won by fifteen year old Serena Olga Vismara from Milan. The name comes from the orbiter name, already defined as Rosetta, which is the name of the stele that allowed Jean-François Champollion to understand ancient Egypt hieroglyphics. In order to complete the translation, he needed to use also the monuments on the island of Philae, the same way Philae lander will help to complete the work of the Rosetta lander.

All content from Kiddle encyclopedia articles (including the article images and facts) can be freely used under Attribution-ShareAlike license, unless stated otherwise. Cite this article:
Philae (spacecraft) Facts for Kids. Kiddle Encyclopedia.