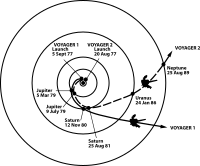 The trajectories that enabled Voyager spacecraft to visit the outer planets and achieve velocity to escape our solar system.

The Voyager program is a space exploration program of the United States' NASA agency. It consists of a pair of unmanned scientific probes, Voyager 1 and Voyager 2. They were launched in 1977 to take advantage of a favorable planetary alignment of the late 1970s. Although they were officially used to study just Jupiter and Saturn, the two probes were able to continue their mission into the outer solar system. They have since continued out and exited the solar system. These probes were built at JPL and were funded by NASA.

Both missions have gathered large amounts of data about the gas giants of the solar system, of which little was known before. In addition, the spacecraft paths have been used to place limits on the existence of Planet X, a planet believed by some people to be farther from the Sun than Pluto.

All content from Kiddle encyclopedia articles (including the article images and facts) can be freely used under Attribution-ShareAlike license, unless stated otherwise. Cite this article:
Voyager program Facts for Kids. Kiddle Encyclopedia.