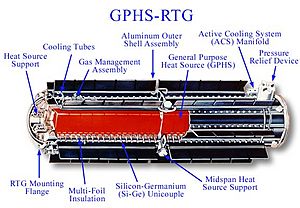 Diagram of an RTG used on the Cassini probe

A radioisotope thermoelectric generator (RTG, RITEG) is an electrical generator that uses an array of thermocouples to convert the heat released by the decay of a suitable radioactive material into electricity by the Seebeck effect. This generator has no moving parts.

RTGs have been used as power sources in satellites, space probes, and uncrewed remote facilities such as a series of lighthouses built by the former Soviet Union inside the Arctic Circle. RTGs are usually the most desirable power source for unmaintained situations that need a few hundred watts (or less) of power for durations too long for fuel cells, batteries, or generators to provide economically, and in places where solar cells are not practical. Safe use of RTGs requires containment of the radioisotopes long after the productive life of the unit. The expense of RTGs tends to limit their use to niche applications in extreme situations.

All content from Kiddle encyclopedia articles (including the article images and facts) can be freely used under Attribution-ShareAlike license, unless stated otherwise. Cite this article:
Radioisotope thermoelectric generator Facts for Kids. Kiddle Encyclopedia.