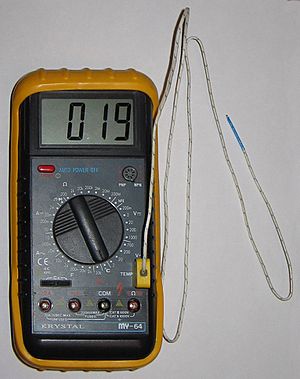 thermocouple plugged to a multimeter displaying room temperature in °C

A thermocouple, TC for short, is a device that converts heat directly into electricity. A thermocouple can also work in reverse - using an electric current to transform into heat as well as cold.

How do thermocouples work?

Imagine that two wires made of different types of metal are connected at one end. If the junction of the two wires is heated, electricity will flow through the wire.

Electrons, when heated, will begin to cross the junction on their own. Because of the different properties of the different metals, the electrons will lose potential energy and gain kinetic energy, just like a ball rolling over a hill to a lower area. Although the voltage created by a thermocouple is very small (in the millivolt range), many thermocouples can be hooked together to make a larger voltage. This is called a thermopile.

Gas heaters with pilot flames are one of the most famous examples for the use of thermocouples. Thermocouples are stacked to make a thermopile, which can generate enough voltage from the heat of the pilot flame to keep the gas valve open which in turn supplies the gas for the pilot flame. If the gas runs out, the flame extinguishes and the voltage across the thermopile decreases, which causes the electric gas valve to close. Many space probes get their electric power from a thermocouple in a radioisotope thermoelectric generator.

Thermocouples are also used in other ways. For instance, they monitor temperatures in air conditioning and refrigerators, and of CPUs in computers, which could be destroyed by overheating.

Some kinds of thermocouple

All content from Kiddle encyclopedia articles (including the article images and facts) can be freely used under Attribution-ShareAlike license, unless stated otherwise. Cite this article:
Thermocouple Facts for Kids. Kiddle Encyclopedia.