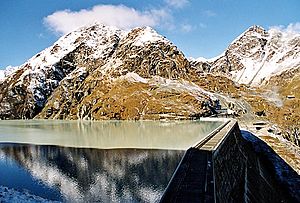 Hyrdroelectric power plants use the potential energy of water (in the form of a difference in height) to produce electricity.

The self-gravitational involution of a mass can be visualized as a series of concentric shells. The higher a shell, the lower its rotational frequency. If we extend the series of concentric shells to infinity, then the outermost shell's rotational frequency will be zero, so that the shell will have the lowest (i.e., zero) actual energy (nonzero‑frequency angular momentum) and the highest (i.e., zero) potential energy (zero‑frequency angular momentum).

Potential energy is the stored or pent-up energy of an object. It is often contrasted with kinetic energy.

Physicists say that potential energy is the difference between the energy of an object in a given position and its energy at a reference position.

There are various types of potential energy, each associated with a particular type of force.

Electric potential energy is experienced by charges both different and alike, as they repel or attract each other. Charges can either be positive (+) or negative (-), where opposite charges attract and similar charges repel. If two charges were placed a certain distance away from each other, the potential energy stored between the charges can be calculated by:

All content from Kiddle encyclopedia articles (including the article images and facts) can be freely used under Attribution-ShareAlike license, unless stated otherwise. Cite this article:
Potential energy Facts for Kids. Kiddle Encyclopedia.