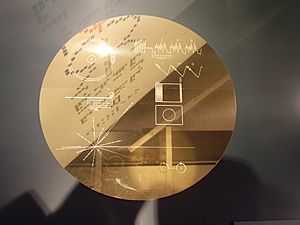 The Voyager Golden Record are records that contain sounds and images chosen to show the life and culture on Earth. These records which were sent in the Voyager spacecraft in 1977, are for alien life forms to see. However, the records can be seen as a symbol rather than a serious attempt to contact alien life forms.

All content from Kiddle encyclopedia articles (including the article images and facts) can be freely used under Attribution-ShareAlike license, unless stated otherwise. Cite this article:
Voyager Golden Record Facts for Kids. Kiddle Encyclopedia.