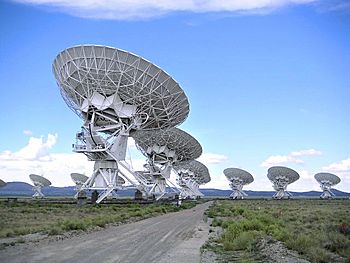 The first detection of radio waves from an astronomical object was made in the 1930s. Karl Jansky found radiation coming from the Milky Way. Later, other sources of radio emission were found. These include stars and galaxies, as well as entirely new classes of objects, such as radio galaxies, quasars, pulsars, and masers.

The discovery of the cosmic microwave background radiation, evidence for the Big Bang theory, was made through radio astronomy.

All content from Kiddle encyclopedia articles (including the article images and facts) can be freely used under Attribution-ShareAlike license, unless stated otherwise. Cite this article:
Radio astronomy Facts for Kids. Kiddle Encyclopedia.