Karl Guthe Jansky (October 22, 1905 – February 14, 1950), was an American physicist and radio engineer who in August 1931 first discovered radio waves emanating from the Milky Way. He is considered one of the founding figures of radio astronomy. 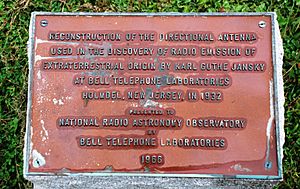 Plaque next to full-size replica of the first radio telescope, built by Karl Jansky

Karl Guthe Jansky was born in what was then the Territory of Oklahoma where his father, Cyril M. Jansky, was Dean of the College of Engineering at the University of Oklahoma at Norman. He was an engineer with a strong interest in physics, a trait passed on to his sons. Karl's brother Cyril Jansky Jr., who was ten years older, helped build some of the earliest radio transmitters in the country.

Karl Jansky attended college at the University of Wisconsin-Madison where he received his BS in physics in 1927. In 1928 he joined the Bell Telephone Laboratories site in Holmdel, New Jersey. Bell Labs wanted to investigate atmospheric and ionospheric properties using "short waves" (wavelengths of about 10-20 meters) for use in transatlantic radio telephone service. As a radio engineer, Jansky was assigned the job of investigating sources of static that might interfere with radio voice transmissions.

At Bell Telephone Laboratories Jansky built an antenna designed to receive radio waves at a frequency of 20.5 MHz (wavelength about 14.6 meters). It was mounted on a turntable that allowed it to be rotated in any direction, earning it the name "Jansky's merry-go-round". It had a diameter of approximately 100 ft. and stood 20 ft. tall. By rotating the antenna on a set of four Ford Model-T tires, the direction of a received signal could be pinpointed. A small shed to the side of the antenna housed an analog pen-and-paper recording system.

After recording signals from all directions for several months, Jansky eventually categorized them into three types of static: nearby thunderstorms, distant thunderstorms, and a faint steady hiss of unknown origin. He spent over a year investigating the source of the third type of static. The location of maximum intensity rose and fell once a day, leading Jansky to initially surmise that he was detecting radiation from the Sun.

After a few months of following the signal and by comparing his observations with optical astronomical maps, Jansky concluded that the radiation was coming from the Milky Way and was strongest in the direction of the center the galaxy, in the constellation of Sagittarius. His discovery was widely publicized, appearing in the New York Times of May 5 1933. 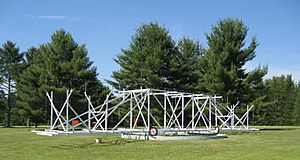 In honor of Jansky, the unit used by radio astronomers for the strength (or flux density) of radio sources is the jansky. Jansky crater on the Moon is also named after him. The NRAO postdoctoral fellowship program is named after Karl Jansky.

A full-scale replica of Jansky's original rotating telescope is located on the grounds of the NRAO site in Green Bank, West Virginia.

Jansky noise is named after Jansky, and refers to high frequency static disturbances of cosmic origin.

Jansky was a resident of Little Silver, New Jersey, and died at age 44 in a Red Bank, New Jersey hospital due to a heart condition.

All content from Kiddle encyclopedia articles (including the article images and facts) can be freely used under Attribution-ShareAlike license, unless stated otherwise. Cite this article:
Karl Guthe Jansky Facts for Kids. Kiddle Encyclopedia.