Occupied by indigenous peoples for thousands of years, in historic times the area of modern-day Red Bank was the territory of the Algonquian-speaking Lenape Native Americans, also called the Delaware by the English. The Lenape lived in the area between the Navesink River and the Shrewsbury River in an area that they called Navarumsunk. The Native Americans traded freely with European settlers from England and the Dutch Republic in the mid-17th century, who purchased land in the area.

Originally part of "Shrewsbury Towne", Red Bank was named in 1736, when Thomas Morford sold Joseph French "a lot of over three acres on the west side of the highway that goes to the red bank." Red Bank was settled by English colonists beginning in the 17th century and became a center for shipbuilding. Its population grew rapidly after 1809, when regularly scheduled passenger ships were established to serve the route to Manhattan.

By 1844, Red Bank had become a commercial and manufacturing center, focused on textiles, tanning, furs, and other goods for sale in Manhattan. With the dredging of the Navesink River about 1845, Red Bank became a port from which steamboats transported commuters to work in Manhattan. Red Bank grew in size as a result of this, as well as the effects of construction of a railway in the town by the Raritan and Delaware Bay Railroad in 1860.

During the 20th century, Red Bank was a strong cultural, economic, and political center in Monmouth County, until it was hindered by the economic recession that began in 1987. During this time, Red Bank's economy, based largely on retail commerce, was in decline, due to a real estate scandal. Local pundits and urban planners referred to the town as "Dead Bank".

Beginning in approximately 1991, under the New Jersey Development and Redevelopment Law, the borough authorized the creation of the Red Bank RiverCenter to manage redevelopment in what was designated as a special improvement district. RiverCenter retains authority over the management and redevelopment of a defined central business district, which includes Broad Street from the post office to Marine Park and from Maple Avenue to one block east of Broad Street. A number of urban redevelopment projects have taken place, including improved signage, distinctive and pedestrian-friendly sidewalks and lighting, a coherent design plan for Main Street and other major thoroughfares, improved condition of parking lots with landscaping, and similar projects.

The district as originally proposed was larger, to include the commercial areas west of Maple Avenue, including the antique buildings, The Galleria, and Shrewsbury Avenue. But, some property owners in this area were opposed to paying the special assessment. Plans for the larger district advanced but opposition became more rigorous. The proposed district was amended to exclude opponents, and the district that was adopted stops at Maple Avenue.

Unincorporated communities, localities and place names located partially or completely within the borough include Newmans Corner.

Red Bank is bordered by the Monmouth County municipalities of Middletown Township and the boroughs of Tinton Falls, Fair Haven, Shrewsbury, and Little Silver.

There were 5,201 households out of which 18.0% had children under the age of 18 living with them, 32.2% were married couples living together, 11.6% had a female householder with no husband present, and 51.9% were non-families. 42.9% of all households were made up of individuals and 15.9% had someone living alone who was 65 years of age or older. The average household size was 2.20 and the average family size was 2.99. 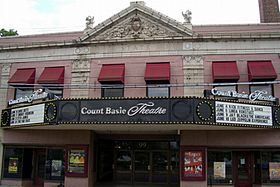 Red Bank is a noted social and commercial destination, filled with boutiques, designer clothing and home stores, parks, and restaurants. Special events are scheduled throughout the summer, such as the KaBoomFest fireworks on July 3, which attracted as many as 150,000 spectators at its 51st annual event in 2010.

The town is considered a center of artistic activity, and is home to the Monmouth County Arts Council, as well as several art and photography galleries.

Whenever the conditions are right, ice boats appear on the Navesink.

Boating, sculling, sailing, and fishing are popular outdoor activities in and near Red Bank; in the winter, ice boats sail on the Navesink when it freezes over, as it did in 2009. The Monmouth Boat Club, Marine Park, and the slips of the Molly Pitcher Inn provide access to the Navesink and, from there, Sandy Hook and the Gateway National Recreation Area, the Jersey Shore and the Atlantic Ocean.

Broad Street is one of the borough's central streets and is known for its lavish Christmas decorations, which appear on the street during the holiday season. The street is closed to traffic for a free concert sponsored by Holiday Express, after which the lights are all lit again. Up to 7,000 people attend the shows annually.

Each year from 1960 through 2011, a fireworks display was launched from the Navesink River close to Red Bank on July 3, the eve of Independence Day. "KaBoomFest" was held in Marine Park, where local bands and vendors formed a major gathering. 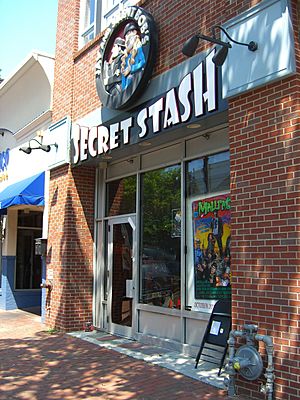 Jay and Silent Bob's Secret Stash on Broad Street. Tinted panels have been placed over the windows and door to block sunlight during filming of the reality TV series Comic Book Men.

Several tunes composed and/or made famous by Count Basie name-check the town in their title, including "Red Bank Boogie" and "The Kid from Red Bank." Basie was born and grew up in Red Bank, starting his musician's career there. A bronze bust of Basie was commissioned to mark what would have been his 100th birthday in 2004, and was placed in the plaza outside the Red Bank train station.

In his 1942 essay "Memoirs of a Drudge", humorist James Thurber recalls being sent to Red Bank by his newspaper's city editor on a tip that "Violets (are) growing in the snow over in Red Bank." Putting in a telephone call to that town's Chief of Police in advance, Thurber is told by a desk sergeant, "Ain't no violence over here."

Some of the films by Kevin Smith, who lived in Red Bank while working as an up-and-coming director, are partially set there, including Chasing Amy, Dogma, and Jay and Silent Bob Strike Back. Smith's comic book store, Jay and Silent Bob's Secret Stash, which is the setting of the AMC reality television series, Comic Book Men, is also located in Red Bank, at 35 Broad Street. Smith and View Askew Productions also host the annual Vulgarthon film marathon in various theaters around Red Bank.

All content from Kiddle encyclopedia articles (including the article images and facts) can be freely used under Attribution-ShareAlike license, unless stated otherwise. Cite this article:
Red Bank, New Jersey Facts for Kids. Kiddle Encyclopedia.