Fair Haven is a borough in Monmouth County, New Jersey, along the Navesink River and is part of the New York Metropolitan Area. Fair Haven is located on the Rumson peninsula and is bordered by Red Bank and Little Silver to the west. As of the 2010 United States Census, the borough's population was 6,121, reflecting an increase of 184 (+3.1%) from the 5,937 counted in the 2000 Census, which had in turn increased by 667 (+12.7%) from the 5,270 counted in the 1990 Census.

Fair Haven was incorporated as a borough by an act of the New Jersey Legislature on March 28, 1912, from portions of Shrewsbury Township, subject to the results of a referendum held on April 23, 1912. Portions of the borough were exchanged with Red Bank on June 17, 1957. 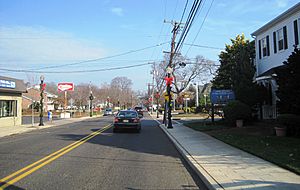 Fair Haven's first permanent settlement dates to a structure built in 1816 at the Navesink River near today's Fair Haven Road. By the mid-19th century, steamboats stopped at "Chandler's Dock" on a route between Red Bank and New York City, bringing visitors to the area and local oysters to the city. Fisk Chapel was rebuilt in 1882 to accommodate the borough's African American population.

Fair Haven has an annual Fireman's Fair during the last weekend of summer including Labor Day weekend which attracts a couple of thousand people, including noted musicians Bruce Springsteen and Bon Jovi. The Fair Haven Fireman's Fair also has a Fireman's night and invites all firefighters from any other firehouse to come and join in the festivities. The Fireman's Fair used to raffle off a car each year, but most attendees already had their own cars and the decision was made in the 1990s to switch to a 50/50 raffle whose prize can be in the tens of thousands of dollars. The fair is on the Fire Company grounds.

There were 1,970 households out of which 51.4% had children under the age of 18 living with them, 73.6% were married couples living together, 8.5% had a female householder with no husband present, and 15.8% were non-families. 13.8% of all households were made up of individuals, and 7.3% had someone living alone who was 65 years of age or older. The average household size was 3.11 and the average family size was 3.45.

NJ Transit provides local service on the 835 route. The nearest train station is at Red Bank, where service is available on the North Jersey Coast Line.

The Fair Haven Public Schools serves students in pre-kindergarten through eighth grade. As of the 2018–19 school year, the district, comprised of two schools, had an enrollment of 966 students and 88.1 classroom teachers (on an FTE basis), for a student–teacher ratio of 11.0:1. Schools in the district (with 2018–19 enrollment data from the National Center for Education Statistics) are Viola L. Sickles School wit 401 students in grades PreK-3 and Knollwood School with 564 students in grades 4-8.

Students in public school for ninth through twelfth grades attend Rumson-Fair Haven Regional High School, together with students from Rumson, where the school is located. As of the 2018–19 school year, the high school had an enrollment of 983 students and 84.8 classroom teachers (on an FTE basis), for a student–teacher ratio of 11.6:1. In 2016, Newsweek ranked RFH the 144th best high school in the United States. Seats on the high school district's nine-member board of education are allocated based on the population of the constituent municipalities, with four seats assigned to Fair Haven.

People who were born in, residents of, or otherwise closely associated with Fair Haven include:

All content from Kiddle encyclopedia articles (including the article images and facts) can be freely used under Attribution-ShareAlike license, unless stated otherwise. Cite this article:
Fair Haven, New Jersey Facts for Kids. Kiddle Encyclopedia.