Monmouth County is a county located in Central New Jersey, in the United States within the New York metropolitan area, and the northernmost county along the Jersey Shore. As of the 2016 Census estimate, the county's population was 625,846, making it the state's fifth-most populous county, representing a decrease of 0.7% from the 2010 Census, when the population was enumerated at 630,380, in turn an increase of 15,079 from 615,301 at the 2000 Census. As of 2010, the county fell to the fifth-most populous county in the state, having been surpassed by Hudson County. Its county seat is Freehold Borough. The most populous place was Middletown Township, with 66,522 residents at the time of the 2010 Census, while Howell Township covered 61.21 square miles (158.5 km2), the largest total area of any municipality.

An English navigator, Henry Hudson, and his crew aboard the Dutch vessel Half Moon, in 1609, spotted land in what is now Monmouth County, most likely off Sandy Hook; however, some historical accounts credit this landing to present-day Keansburg. Among the first European settlers and majority landowners in the area was Richard and Penelope Stout. Penelope miraculously survived her wounds from a native attack in Sandy Hook and further lived to the age of 110. Additionally, a group of Quaker families from Long Island who settled the Monmouth Tract, an early land grant from Richard Nicolls issued in 1665. They were followed by a group of Scottish settlers who inhabited Freehold Township in about 1682–85, followed several years later by Dutch settlers. As they arrived in this area, they were greeted by Lenape Native Americans, who lived in scattered small family bands and developed a largely amicable relationship with the new arrivals. Enslaved Africans were present in the area from at least 1680, and by 1726 made up 9% of the total population of the county.

Monmouth County was established on March 7, 1683, while part of the province of East Jersey. On October 31, 1693, the county was partitioned into the townships of Freehold, Middletown and Shrewsbury. Its name may come from the Rhode Island Monmouth Society or from a suggestion from Colonel Lewis Morris that the county should be named after Monmouthshire in Wales, Great Britain. Other suggestions include that it was named for James Scott, 1st Duke of Monmouth (1649–1685), who had many allies among the East Jersey leadership. In 1714, the first county government was established.

At the June 28, 1778, Battle of Monmouth, near Freehold Township, General George Washington's soldiers battled the British under Sir Henry Clinton, in the longest land battle of the American Revolutionary War. It was at Monmouth that the tactics and training from Friedrich Wilhelm von Steuben developed at Valley Forge during the winter encampment were first implemented on a large scale.

Much of Monmouth County remains flat and low-lying even far inland. However, there are some low hills in and around Holmdel Township, and one of them, Crawford Hill, the former site of a radar facility, is the county's highest point, variously listed at 380 to 391 feet (116 to 119 m) above sea level. The top portion of the hill is owned by Alcatel-Lucent and houses a research laboratory of Bell Laboratories. The northeastern portion of the county, in the Locust section of Middletown Township and the boroughs of Highlands and Atlantic Highlands, are also very hilly. The lowest point is sea level.

Along with adjacent Ocean County, Monmouth County is a mecca of boating and fishing. Its waterways include several rivers and bays that flow from the Raritan Bayshore into Raritan Bay and Lower New York Bay and into the Atlantic Ocean. The Manasquan Inlet is located in the county, which connects the Atlantic Ocean with the estuary of the Manasquan River, a bay-like body of saltwater that serves as the starting point of the Intracoastal Waterway, which attracts as many as 1,600 boats each weekend during the peak season.

The state routes include Route 18, Route 33, Route 33 Business, Route 34, Route 35, Route 36, Route 66, Route 70, Route 71, Route 79, and Route 138. U.S. Route 9 passes through and practically bisects Monmouth, stretching through the county for more than 20 miles (32 km) from Lakewood in Ocean County in the south to Old Bridge Township in Middlesex County to the north.

Limited access roads include Interstate 195, the only interstate to pass through the county, which extends for 8.4 miles (13.5 km) from Jackson in Ocean County on the west to Wall in Monmouth County on the east. The New Jersey Turnpike (Interstate 95) just misses the county border by 0.2 miles (0.32 km) near Upper Freehold Township. The Garden State Parkway extends 26.5 miles (42.6 km) from Brick Township in Ocean County in the south to Old Bridge Township in Middlesex County to the north. The Parkway's Monmouth Service Area is located at milepost 100, between exits 98 and 100. 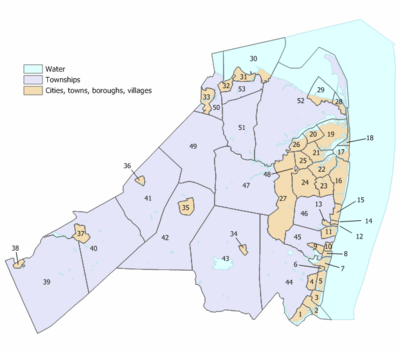 Municipalities in Monmouth County (with 2010 Census data for population, housing units and area in square miles) are listed below. Other, unincorporated communities in the county are listed next to their parent municipality. Many of these areas are census-designated places (labeled as CDPs) that have been created by the United States Census Bureau for enumeration purposes within a township, with the 2010 Census population listed. Other communities and enclaves that exist within a municipality are also listed.

On October 29, 2012, Hurricane Sandy caused catastrophic damage to coastal areas of Monmouth County. As Sandy's surge arrived in Monmouth County, flood levels of 13.31 feet (4.06 m) above normal were measured at Sandy Hook shortly before the destruction of the tidal station, breaking all previous local records. The surge caused waves as high as 32.5 feet (9.9 m), measured where the Sandy Hook Bay meets the New York Bay.

All content from Kiddle encyclopedia articles (including the article images and facts) can be freely used under Attribution-ShareAlike license, unless stated otherwise. Cite this article:
Monmouth County, New Jersey Facts for Kids. Kiddle Encyclopedia.