Bradley Beach was named for James A. Bradley, the developer responsible for the creation of the Bradley Beach and Asbury Park. In 1871, William B. Bradner, with James A. Bradley as an investor, acquired 54 acres (22 ha) of land north of Avon-by-the-Sea, and south of Ocean Grove. At the time the area where they had purchased their land was known informally as Ocean Park and was part of Ocean Township and later became part of Neptune Township.

It was the first location in the United States to charge sea bathers for beach access when it began minting its own tin badges starting in 1929.

Sand dunes were constructed on the borough's beaches in the mid-1990s at a cost of $10,000, using snow fences and discarded Christmas trees to build a base of wind-driven sand that rose 15 feet (4.6 m), atop which dune grass was planted. These dunes helped provide significant protection to Bradley Beach from the havoc wreaked by Hurricane Sandy in October 2012, blunting the impact of the storm surge and limiting damage in the borough to beach areas and homes near the shore to $3 million, while neighboring communities that hadn't constructed such dunes suffered much more extensive damage.

The borough had gone into decline after World War II, with growth returning around 2000 as seasonal visitors and new residents purchased properties, which borough regulations require that they must be renovated on the same footprint as the original home. 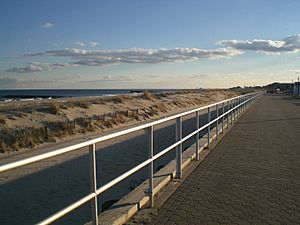 The beach and boardwalk of Bradley Beach

Route 71 (Main Street) is the main road that runs through the town. Route 18 is in neighboring Neptune Township, and both the Garden State Parkway and I-195 are too far away.

NJ Transit bus service is available between the borough and Philadelphia on the 317 route, with local service offered on the 830 route.

The Bradley Beach School District serves public school students in pre-kindergarten through eighth grade at Bradley Beach Elementary School. As of the 2017–18 school year, the district, comprising one school, had an enrollment of 318 students and 36.8 classroom teachers (on an FTE basis), for a student–teacher ratio of 8.6:1.

An application program with Red Bank Regional High School or the schools in the Monmouth County Vocational School District are alternatives available for students from the borough attending public high school.

The Bradley Beach Public Library is located at 511 Fourth Avenue, on the corner of Fourth Avenue and Hammond Avenue. In early 2017, a building expansion was added to the south elevation of the circa 1927 built library building. The structural design was performed by the Structural Engineering department of French Parrello Associates (FPA). There are many activities at the library for people of all ages including various story times, a writing group and weekly Overeaters Anonymous meetings. In the spring of 2014 the library introduced a book bike which a librarian or volunteer rides around town and on the boardwalk to give books and to tell residents about the opportunities and activities coming up at the library and around the borough.

People who were born in, residents of, or otherwise closely associated with Bradley Beach include:

All content from Kiddle encyclopedia articles (including the article images and facts) can be freely used under Attribution-ShareAlike license, unless stated otherwise. Cite this article:
Bradley Beach, New Jersey Facts for Kids. Kiddle Encyclopedia.