The site of the terminal has been used since colonial times to link Manhattan Island and points west. It was long a ferry landing accessible via turnpike roads, and later plank roads (namely the Hackensack, the Paterson and a spur of the Newark Plank Road). In 1811, the first steam-powered ferries began service under John Stevens, an inventor who founded Hoboken. 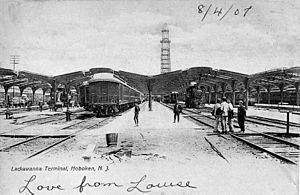 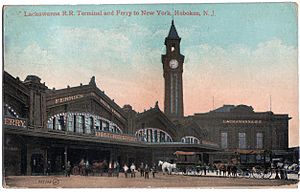 Hoboken Terminal shortly after its construction 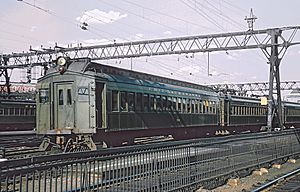 An Erie Lackawanna commuter train arriving at Hoboken in November 1978

The coming of the railroads brought more and more travelers to the west bank of the Hudson River. Passengers traveling to Manhattan from most of the continental USA had to transfer to a ferry at the riverbank. Cuts and tunnels were constructed through Bergen Hill to rail–ferry terminals on the west bank of the river and the Upper New York Bay. The first of the Bergen Hill Tunnels under Jersey City Heights was opened in 1876 by the Morris and Essex Railroad, which was leased by the Delaware, Lackawanna, and Western Railroad (DL&W). The DL&W built the modern terminal in 1907, and opened the second parallel tunnel in 1908. Both tunnels are still used by NJ Transit. The tubes of the Hudson and Manhattan Railroad, forerunner of PATH, were extended to Hoboken Terminal upon its opening. The first revenue train on the new line ran from the terminal on February 26, 1908.

At the peak of intercity rail service, five passenger terminals were operated by competing railroad companies along the Hudson Waterfront. Of these, Hoboken Terminal is the only one still in active use. Those at Weehawken (New York Central), Pavonia (Erie Railroad), and Exchange Place (Pennsylvania Railroad) were demolished in the 1960s, while the Central Railroad of New Jersey Terminal was restored and is now part of Liberty State Park.

In October 1956, four years before its merger with the DL&W to form the Erie Lackawanna Railway, the Erie Railroad began shifting its trains from Pavonia Terminal to Hoboken. The Erie moved its Northern Branch trains to Hoboken in 1959. In October 1965, on former Erie routes, there were five weekday trains run to Midvale, three to Nyack on the Northern Branch, three to Waldwick via the Newark Branch, two to Essex Fells on its Caldwell Branch, two to Carlton Hill, and one to Newton. All those trains were dropped in 1966. The last intercity trains that called at the station, with service to Chicago and Buffalo, were discontinued on January 5, 1970.

Numerous streetcar lines (eventually owned and operated by the Public Service Railway), including the Hoboken Inclined Cable Railway, originated/terminated at the station until bustitution was completed on August 7, 1949. 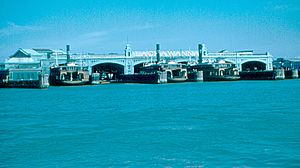 Ferry service from the terminal to lower Manhattan ended on November 22, 1967. It resumed in 1989 on the south side of the terminal and moved back to the restored ferry slips inside the historic terminal on December 7, 2011. In addition, the terminal's clock tower was rebuilt in a renovation that took place between 2005 and 2009. The terminal building's walls were demolished and rebuilt to resemble their original appearance.

The station was badly damaged during Hurricane Sandy on October 29, 2012, with a 5 feet (1.5 m) storm surge inundating the facility; the water rose as high as 8 feet (2.4 m) in the PATH tunnels. The waiting room reopened in January 2013, while extensive repairs were still in progress. Daytime PATH service to midtown Manhattan was restored earlier, on December 19, and pre-Sandy service patterns were gradually restored by March 1, 2013.

In 1930, Thomas Edison was at the controls for the first departure of a regular-service electric multiple unit train from Hoboken Terminal to Montclair. One of the first installations of central air-conditioning in a public space was at the station, as was the first non-experimental use of mobile phones.

The station has been used for film shoots, including Funny Girl, Three Days of the Condor, Once Upon a Time in America, The Station Agent, The Curse of the Jade Scorpion, Julie & Julia, Kal Ho Naa Ho, Rod Stewart's Downtown Train video (1990) and Eric Clapton's video for his 1996 single "Change the World".

Hoboken Terminal is the terminus and namesake for NJ Transit's Hoboken Division, which consists mostly of the former (Erie) Lackawanna commuter routes in northern New Jersey.

PATH trains provide 24-hour service from a three-track underground terminal located north of the surface platforms. Three routes are offered on weekdays, and one route is offered on late nights, weekends and holidays. Entrances are from the main concourse or street, below the Hudson Place bus station with both an elevator and stairs. Travel to Newark Penn Station always requires a transfer, as does weekday service to Journal Square Transportation Center.

Hoboken Terminal is the terminus for two of the three Hudson-Bergen Light Rail routes and the Bayonne Flyer. Light rail platforms for which are located south of Track 18 and the terminal building, and provide a pathway connection to 14th Street along the Hudson River. 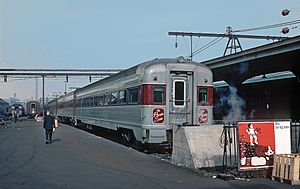 The Phoebe Snow at Hoboken Terminal in September 1965

Until the 1960s, Hoboken Terminal was also a major intercity station, serving as the New York-area terminus for several Lackawanna and Erie Lackawanna streamliner trains. Passenger trains extended beyond the daily commuter market to Buffalo, Chicago and northeastern Pennsylvania. 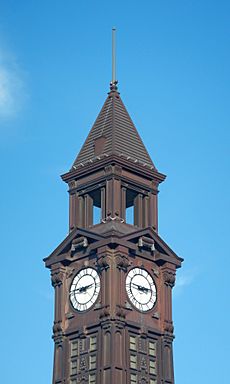 Designed by architect Kenneth M. Murchison in the Beaux-Arts style, the rail and ferry terminal buildings were constructed in 1907 by the Delaware, Lackawanna and Western Railroad. The terminal building is listed on the New Jersey Register of Historic Places and the National Register of Historic Places (added in 1973 as #73001102 as the Erie-Lackawanna Railroad and Ferry Terminal).

The large main waiting room, with its floral and Greek Revival motifs in tiled stained glass by Louis Comfort Tiffany set atop bands of pale cement, is generally considered one of the finest in the U.S. aesthetically. The terminal exterior extends to over four stories and has a distinguished copper-clad façade with ornate detailing. Its single-story base is constructed of rusticated Indiana limestone. A grand double stair with decorative cast-iron railings within the main waiting room provides an entrance to the upper-level ferry concourse.

A 225-foot (69 m) clock tower was originally built with the terminal over a century ago, but was dismantled in the early 1950s due to structural damage and deterioration from weather damage. A new clock tower, replicating the original, was constructed during the terminal's centennial year of 2007 and was fully erect that November. The replica tower has 4-foot-high (1.2 m) copper letters spelling out "LACKAWANNA", which are lit at night.

The terminal is considered a milestone in American transportation development, combining rail, ferry, subway, streetcar (buses were added later, and light-rail was added even later), and pedestrian facilities in one of the most innovatively designed and engineered structures in the nation. Hoboken Terminal was also one of the first stations in the world to employ the Bush-type train shed, designed by and named for Lincoln Bush of the DL&W, which quickly became ubiquitous in station design. The station is unusual for a New York City area commuter railroad terminal in that it still has low-level platforms, requiring passengers to use stairs on the train to board and alight. 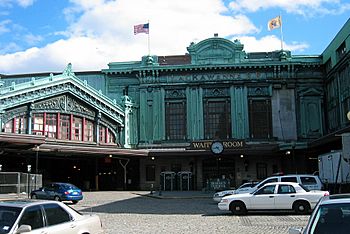 Though the passenger facilities are located within Hoboken, large parts of the infrastructure that supports them are located in Jersey City. The Hoboken/Jersey City line cuts across the rail yard at a northwest diagonal from the river to the intersection of Grove Street and Newark Street. It is at this corner that Observer Highway begins running parallel to the tracks and creating a de facto border for Hoboken. The Long Slip (created with the landfilling of Harsimus Cove) creates the southern perimeter of the station, separating it from Jersey City's Newport neighborhood.

Motor vehicle access to the station is extremely limited. At the eastern end of Observer Highway buses are permitted to enter their terminal. Other vehicles are required to do a dog-leg turn onto Hudson Place. This 0.05-mile-long (0.080 km) street (designated CR 736) is the only one with motor vehicle traffic adjacent to the station and acts as a pick-up/drop off point, and hosts a dedicated taxi stand. Egress from the terminal requires travelling north (for at least one block) on River Street.

Hudson Place ends at Warringtron Plaza. On this square one finds the main entrance to the waiting room and the vehicle entrances to the currently unused original ferry slips. A statue of Sam Sloan, president of the DL&W, moved during renovations faces the loading docks of the nearby post office. The plaza was named in honor of George Warrington, influential in the creation of NJ Transit, and as its executive director enabled the purchase and preservation of the station.

In 2009, pedestrian access to the terminal from the south was made possible with the opening of a new segment of the Hudson River Waterfront Walkway. The closing of this gap along the promenade nearly completes the stretch from the Morris Canal to Weehawken Cove, with signage along the concourse at the rail head inside the terminal indicating that it is officially part of the walkway.

Hoboken Terminal viewed from the northeast, with Jersey City skyline in the background

All content from Kiddle encyclopedia articles (including the article images and facts) can be freely used under Attribution-ShareAlike license, unless stated otherwise. Cite this article:
Hoboken Terminal Facts for Kids. Kiddle Encyclopedia.