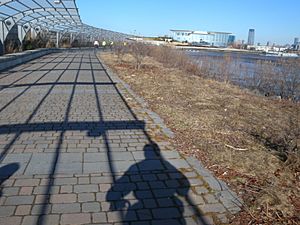 The Hudson River Waterfront Walkway, also known as the Hudson River Walkway, is an ongoing and incomplete project located on Kill van Kull and the western shore of Upper New York Bay and the Hudson River, implemented as part of a New Jersey state-mandated master plan to connect the municipalities from the Bayonne Bridge to the George Washington Bridge with an urban linear park and provide contiguous unhindered access to the water's edge.

There is no projected date for its completion, though large segments have been built or incorporated into it since its inception. The southern end in Bayonne may eventually connect to the Hackensack RiverWalk, another proposed walkway along Newark Bay and Hackensack River on the west side of the Hudson County peninsula, and form part of a proposed Harbor Ring around the harbor. Its northern end is in Palisades Interstate Park, allowing users to continue along the river bank and alpine paths to the New Jersey/New York state line and beyond. (A connection to the Long Path, a 330-mile (530 km) hiking trail with terminus near Albany, is feasible.)

As of 2007, eleven miles (18 km) of walkway have been completed, with an additional five miles (8 km) designated HRWW along Broadway in Bayonne. A part of the East Coast Greenway, or ECG, a project to create a nearly 3000-mile (4828 km) urban path linking the major cities along the Atlantic coast runs concurrent with the HRWW.

In 2013 the walkway showed signs of age. Some of the pilings on which it is built succumbed to marine worms and effects of Hurricane Sandy in New Jersey which undermined bedding.

NASA image of the lower Hudson

The distance of the walkway from beginning to end is approximately 18.5 miles (29.8 km) as "the crow flies". It is considerably longer as it follows the contour of the shore-line. It traverses established residential and commercial areas, re-developed piers, wetland preservation zones, industrial and transportation infrastructure, and is dotted with public and private marinas and parks. Expansive views of the water and the New York skyline can be seen from most of its length. It passes through the following municipalities (which have combined population of approximately 550,000).

A walkway or promenade along the northeastern New Jersey waterfront was first discussed at a state level in the late 1970s. In 1988, the New Jersey Department of Environmental Protection created the Coastal Zone Management Rules, which outlined the regulations and specifications for its construction. They require anyone building within 100 feet (30 m) of the water's edge to provide a minimum of 30 feet (9.1 m) wide open, public space along the shoreline. Construction must be permitted by the agency and paid for by the developer. In 1999, the National Association of Home Builders and the New Jersey Builders Association challenged the obligation in court as an unfair taking of private property under eminent domain, saying that property owners should be compensated as specified by the "Takings clause" of the Fifth Amendment. A federal judge rejected the suit, upholding a state rule that requires property owners to provide access to the waterfront. By the end of 2019, most of the Walkway was complete. Only 7 "gaps" remain to be built from Liberty State Park in Jersey City to the George Washington Bridge. Major sections of the Walkway remain unbuilt in industrial Bayonne.

Parks and points of interest 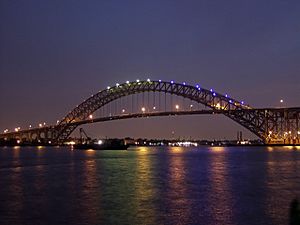 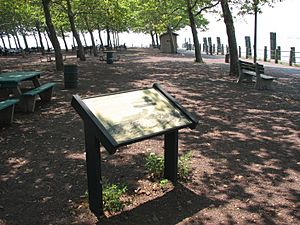 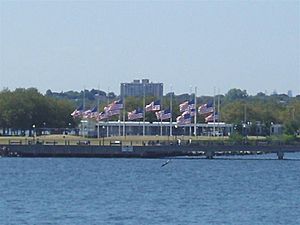 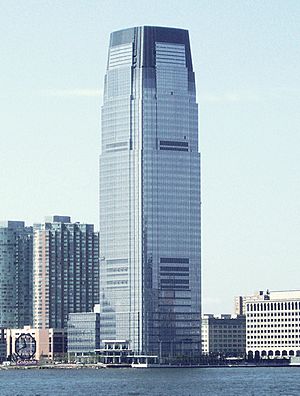 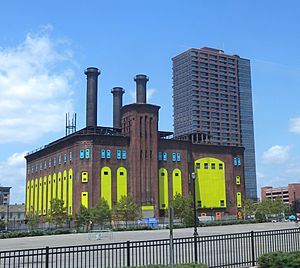 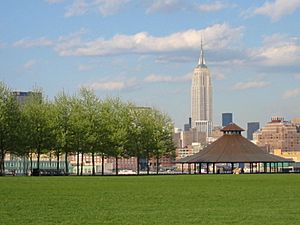 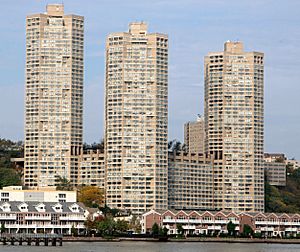 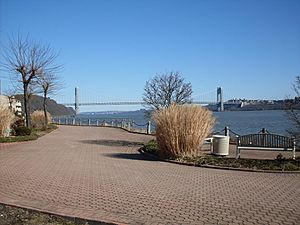 All content from Kiddle encyclopedia articles (including the article images and facts) can be freely used under Attribution-ShareAlike license, unless stated otherwise. Cite this article:
Hudson River Waterfront Walkway Facts for Kids. Kiddle Encyclopedia.