West New York is one of the most densely populated municipalities in the United States as well as worldwide.

West New York was incorporated as a town by an act of the New Jersey Legislature on July 8, 1898, replacing Union Township, based on the results of a referendum held three days earlier. West New York underwent a massive growth at the beginning of the 20th century, driven by development of textile industries that made North Hudson the "Embroidery Capital of the United States".

The town was populated mainly with Italian Americans and German Americans. The 1960s saw an influx of Cuban émigrés to the area, once called Havana on the Hudson; it has since become one of the United States cities with a majority Hispanic population. Simultaneously, high-rise apartments, some of the tallest buildings in North Hudson, were built along Boulevard East, adding to the population of the town, giving it one of highest population densities in the country. Since the 1980s the Hudson waterfront, which had been part of the Weehawken Terminal has been redeveloped from industrial to residential and recreational uses, including the Hudson River Waterfront Walkway. 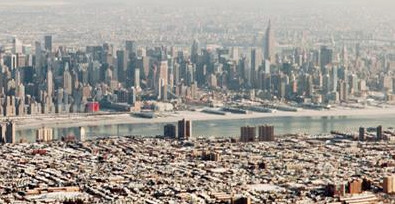 West New York is one of North Hudson's communities atop The Palisades above the Hudson River, and home to the highest point in the county. Its Hudson Waterfront has been known as Bulls Ferry since before the American Revolutionary War. Bergenline Avenue is its main commercial thoroughfare, while the wide two-way 60th Street is a major cross-town thoroughfare, and site of Town Hall. More than half of U.S. Presidents have streets bearing their name in the town.

As of the 2000 Census, West New York was ranked as #52 on a list of cities with the highest percentage of renters. 80.1% of West New York residents lived in renter-occupied housing units, vs. 33.8% nationwide. 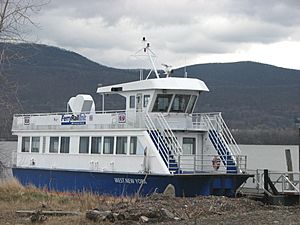 This New York Waterway ferry named West New York is not used on the routes which serve the town.

The Bergenline Avenue station of Hudson-Bergen Light Rail is located at the city line with Union City, while the Weehawken Port Imperial is located on the Weehawken waterfront at the foot of Pershing Road near the NY Waterway ferry terminal. Regular ferry crossings of the Hudson River run daily.

West New York is located within the New York media market, with most of its daily papers available for sale or delivery. The Jersey Journal is a local daily paper based in Jersey City. Local weeklies include the free bilingual paper, Hudson Dispatch Weekly, a former daily, The West New York Reporter, which is part of the Hudson Reporter group of local weeklies, and the Spanish language El Especialito. River View Observer is a monthly newspaper that covers the Hudson County waterfront market.

In the late 2000s, West New York, Weehawken, Union City and North Bergen came to be dubbed collectively as "NoHu", a North Hudson haven for local performing and fine artists, many of whom are immigrants from Latin America and other countries, in part due to lower housing costs compared to those in nearby art havens such as Hoboken, Jersey City and Manhattan.

All content from Kiddle encyclopedia articles (including the article images and facts) can be freely used under Attribution-ShareAlike license, unless stated otherwise. Cite this article:
West New York, New Jersey Facts for Kids. Kiddle Encyclopedia.