County Route 501 (CR 501) is a county highway in New Jersey in two segments spanning Middlesex, Hudson and Bergen Counties. The southern section runs from South Plainfield to Perth Amboy, the northern section runs from Bayonne to Rockleigh, and the two sections are connected by New York State Route 440 (NY 440) across Staten Island.

The New Jersey Department of Transportation lists CR 501 as a single highway with a length of 53.07 miles (85.41 km), which includes both road sections as well as the connection along NY 440.

County Route 501 is signed east-west in Middlesex County. The western (southern) terminus of County Route 501 is at CR 529 in South Plainfield. From there, the route heads east to Metuchen, where it has a short concurrency with Route 27. It then continues east, crossing the Garden State Parkway between Exits 127 and 129 in Woodbridge, following concurrencies with Route 184 and Route 440 to the southern section's eastern terminus at the Outerbridge Crossing.

The northern section of CR 501 starts at the Route 440/Bayonne Bridge junction in Bayonne, making its way north to Route 63 in North Bergen. The highway crosses Route 139 to the Holland Tunnel and Route 495 to the Lincoln Tunnel.

At its junction with Route 63 in North Bergen, CR 501 begins a concurrency with Route 63 into Bergen County, while John F. Kennedy Boulevard loops around the northern end and heads south to Guttenberg, West New York and Weehawken. 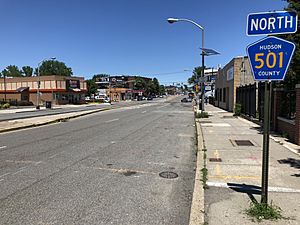 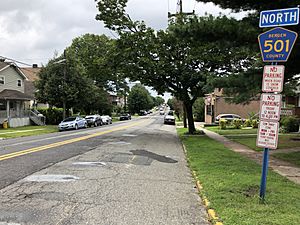 In Bergen County, CR 501 leaves its concurrency with Route 63 in Palisades Park, using Central Boulevard to connect to the US 1/9/46 concurrency and Route 93. It is then concurrent with Route 93 until it reaches that route's northern terminus at Route 4 in Englewood. CR 501 continues north from this junction through Rockleigh, crossing the New York State Line and becoming New York State Route 340.

In 1808, the Perth Amboy Turnpike was legislated to run from Perth Amboy to Bound Brook. The company struggled to complete their road, having petitioned in 1820 to the state legislature to extend the time to complete the road. They were unsuccessful, as the road was only completed as far as Piscataway. 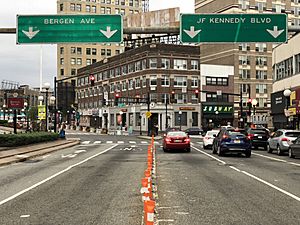 Prior to being renamed in honor of John F. Kennedy in the 1960s, the John F. Kennedy Boulevard was known as Hudson Boulevard. While there was discussion of building a county long road as early as the 1870s, parts of Hudson County Boulevard were officially opened in 1896. By 1913 it was completed, and considered to be fine for "motoring", and included the road's eastern section, Boulevard East, into which Kennedy Boulevard forks at 91st Street. (The fork that continues north merges with Bergen Boulevard.) Taken as a single road, the circuitous route of west and east sections of the entire boulevard runs from the southern tip of the county at Bergen Point to its northern border with Bergen County and south again to the Hoboken city line.

County officials had expressed interest in building a pedestrian bridge that crosses Kennedy Boulevard at 32nd Street, at the Union City-North Bergen border since at least. The two cities contracted a company to build the bridge for just over $4 million in November 2010. Construction plans began in May 2011, and field work began later that August.

All content from Kiddle encyclopedia articles (including the article images and facts) can be freely used under Attribution-ShareAlike license, unless stated otherwise. Cite this article:
County Route 501 (New Jersey) Facts for Kids. Kiddle Encyclopedia.