Edison is a township located in Middlesex County, New Jersey, United States. Situated in central New Jersey, Edison lies within the core of the state's Raritan Valley region and is part of the New York City metropolitan area. Home to Little India, as of the 2010 United States Census, Edison had a total population of 99,967, retaining its position as the fifth-most populous municipality in New Jersey.

What is now Edison Township was originally incorporated as Raritan Township by an act of the New Jersey Legislature on March 17, 1870, from portions of both Piscataway Township and Woodbridge Township. The township got its original name from the Raritan indigenous people. Portions of the township were taken to form Metuchen on March 20, 1900, and Highland Park on March 15, 1905. The name was officially changed to Edison Township on November 10, 1954, in honor of inventor Thomas Edison, who had his main laboratory in the Menlo Park section of the township.

Edison Township, comprising former sections of Piscataway and Woodbridge townships, was settled (by Europeans) in the 17th century. The earliest village was Piscatawaytown, which is centered around St. James Church and the Piscatawaytown Common, near the intersection of Plainfield and Woodbridge avenues in south Edison. The Laing House of Plainfield Plantation, the Benjamin Shotwell House, and the Homestead Farm at Oak Ridge, are buildings from the colonial era included in National Register of Historic Places listings in Middlesex County. 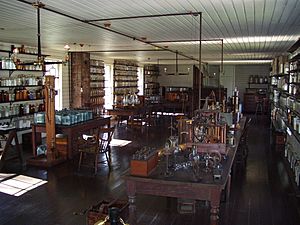 In 1876, Thomas Edison set up his home and research laboratory in New Jersey on the site of an unsuccessful real estate development in Raritan Township called "Menlo Park", (currently located in Edison State Park). While there he earned the nickname "the Wizard of Menlo Park." Before his death at age 83 in 1931, the prolific inventor amassed a record 1,093 patents for creations including the phonograph, a stock ticker, the motion-picture camera, the incandescent light bulb, a mechanical vote counter, the alkaline storage battery including one for an electric car, and the first commercial electric light.

The Menlo Park lab was significant in that was one of the first laboratories to pursue practical, commercial applications of research.It was in his Menlo Park laboratory that Thomas Edison came up with the phonograph and a commercially viable incandescent light bulb filament. Christie Street was the first street in the world to use electric lights for illumination. Edison subsequently left Menlo Park and moved his home and laboratory to West Orange in 1886.

Near Piscatawaytown village, a portion of the Township was informally known as "Nixon," after Lewis Nixon, a manufacturer and community leader. Soon after the outbreak of World War I, Nixon established a massive volatile chemicals processing facility there, known as the Nixon Nitration Works. It was the site of the 1924 Nixon Nitration Works disaster, a massive explosion and resulting fire that killed 20 persons and destroyed several square miles of the Township.

In 1954, the township's name was changed to honor inventor Thomas A. Edison. Also on the ballot in 1954 was a failed proposal to change the community's name to Nixon.

Edison has been one of the fastest-growing municipalities in New Jersey. As of the 2000 United States Census, it was the fifth most-populated municipality in the state, after the cities of Newark, Jersey City, Paterson, and Elizabeth.

Edison is primarily a middle-class community with more than 75 ethnic communities represented. Edison has a large Jewish community next to Highland Park, with multiple synagogues located in Edison. Edison also has a growing Indian community and a number of temples serving the religious needs of the community. Reflecting the number of Edison's residents from India and China, the township has sister city arrangements with Shijiazhuang, China, and Vadodara, India.

Edison is on the east side of Raritan Valley (a line of communities in central New Jersey), along with Plainfield, and completely surrounds the borough of Metuchen, New Jersey, making it part of 21 pairs of "doughnut towns" in the state, where one municipality entirely surrounds another. The township borders East Brunswick Township, Highland Park, New Brunswick, Piscataway Township, Sayreville, South Plainfield and Woodbridge Township in Middlesex County; Clark, Plainfield and Scotch Plains in Union County.

There were 34,972 households out of which 36.4% had children under the age of 18 living with them, 62.3% were married couples living together, 9.6% had a female householder with no husband present, and 24.2% were non-families. 20.4% of all households were made up of individuals, and 7.9% had someone living alone who was 65 years of age or older. The average household size was 2.80 and the average family size was 3.26.

Oak Tree Pond is the site of the Battle of Short Hills, a minor battle of the American Revolutionary War and whose conversion into a park ended a real estate development controversy.

Roosevelt Park, located between Parsonage Road and Route 1, west of the Mall, covers 217 acres (88 ha), including the 8-acre (3.2 ha) Roosevelt Park Lake. The park was established in 1917, making it the oldest county park in Middlesex County. 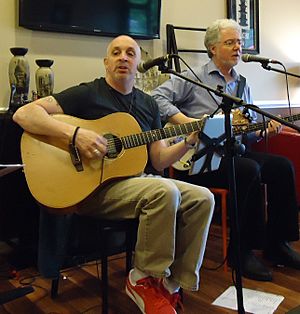 Musicians perform at The Coffee House on Amboy Avenue.

Starting in the 2000s, manufacturing began to leave Central Jersey, and many facilities closed and moved overseas. The Ford plant was demolished by 2008 and was replaced by Sam's Club, Topgolf and Starbucks.

Majesco Entertainment, a video game company, has its corporate headquarters in Edison. Other companies have warehouse operations within Edison. These companies include the Italian food producer and importer Colavita, an Amazon fulfillment center, as well as the regional hubs for FedEx, UPS, and Newegg. In addition Edison is home to the state's largest private convention center, the New Jersey Convention and Exposition Center, located within the Raritan Center Business Park. Raritan Center itself is the largest industrial park on the east side of the Mississippi River. The United States headquarters of the international company Zylog Systems is located in Edison, as is the headquarters of the e-commerce companies Boxed and Bare Necessities.

The community is also served by the Greater Brunswick Charter School, a K-8 charter school serving students from Edison, Highland Park, Milltown and New Brunswick. As of the 2017–18 school year, the school had an enrollment of 395 students and 33.0 classroom teachers (on an FTE basis), for a student–teacher ratio of 12.0:1.

Other private schools in Edison include Lakeview School (for children ages 3–21 with disabilities), Our Lady of Peace School and Wardlaw-Hartridge School (PreK-12, founded in 1882).

In 1998, the Huaxia Edison Chinese School, which teaches in Simplified Chinese on Sunday afternoons, was established in Thomas Jefferson Middle School, subsequently relocating to Herbert Hoover Middle School. Huaxia currently resides in Edison High School. However, many families from Taiwan send their children to Edison Chinese School, located at John Adams Middle School, or Tzu Chi, located at Woodrow Wilson Middle School. These schools both teach Traditional Chinese. J.P. Stevens High School offers Mandarin Chinese and Hindi as an elective language for students who are interested in learning it.

Middlesex County College (MCC) is a public, two-year community college located in Edison at the intersection of Woodbridge Avenue and Mill Road.

Plainfield Country Club is a private country club that has hosted the 1987 U.S. Women's Open and The Barclays golf tournament, the first PGA Tour FedEx Cup playoff event, in both 2011 and 2015.

View south along the New Jersey Turnpike (I-95) in Edison

State roads include Route 27 and 440, both of which are state-maintained. U.S. Route 1 also passes through the township. Interstate 287 passes through Edison, where it houses its southern end at I-95. The municipality also houses about a 5-mile (8.0 km) section of the New Jersey Turnpike (Interstate 95). Exit 10 is located in Edison, featuring a 13-lane toll gate and a unique interchange design. When the "dual-dual" setup of the turnpike was created, it first started in Edison and continued north to Exit 14 in Newark. It wasn't until 1973 that the "dual-dual" was extended south of 10 to Exit 9 in East Brunswick Township (and then extended further south in 1990 to Exit 8A in Monroe Township).

Since Interstate 287 connects to Interstate 87 (the New York State Thruway), Exit 10 (of the turnpike) is one of the busiest interchanges to be used by tractor-trailers as it connects the New Jersey Turnpike to the New York Thruway. For truck drivers, it is the only direct limited-access road connection they have from the Turnpike to the Thruway as the Garden State Parkway, which has its northern terminus at the Thruway, prohibits trucks from using the roadway north of Exit 105.

In 2009, the New Jersey Department of Transportation selected Edison as one of the first communities to have a red light camera enforcement system. The program was ended by the state in December 2014, despite a more than 30% drop in accidents at the three camera-controlled intersections in the township.

Edison station, located in South Edison, is served by NJ Transit northbound trains to Newark Penn Station and Penn Station New York, and southbound to the Trenton Transit Center via the Northeast Corridor Line, with connecting service to Amtrak, and SEPTA. Some passengers in North Edison are closer to, and may prefer to use, the Metropark station (near neighboring Iselin in Woodbridge Township) or Metuchen station.

JFK Medical Center, located on James Street off Parsonage Road is a 498-bed hospital founded in 1967.

Roosevelt Care Center is a long term/sub-acute care facility located just east of Roosevelt Park. The facility was original constructed in 1936 under the auspices of the Work Projects Administration.

In 1982, the BPU and New Jersey Bell, after receiving thousands and complaints from both North and South Edison residents, had made an exception that any calls originating and terminating in the Township would be considered a local call. This was due to the new home construction in Edison where existing cables that belonged to the Rahway central office were assigned to give new phone service to over 400 homes.

In 1997, mandatory ten-digit dialing came to Edison with the introduction of Area code 732. Edison residents living on Roxy Avenue once again were in the spotlight in the news, with one side of the street served by the Rahway central office (Area code 732) and the other side of the street is served by the Plainfield central office (Area Code 908). Residents complained to the BPU and Bell Atlantic that it would be easier to yell across the street then dial a ten-digit number call their neighbor across the street.

Edison has Cablevision's Optimum cable television service. Before Cablevision, there was TKR, which was so poorly run that many FCC and BPU complaints about programming and many town hall meetings eventually forced change. TKR was bought out by Cablevision.

All content from Kiddle encyclopedia articles (including the article images and facts) can be freely used under Attribution-ShareAlike license, unless stated otherwise. Cite this article:
Edison, New Jersey Facts for Kids. Kiddle Encyclopedia.