Willard Mitt Romney (born March 12, 1947), usually called Mitt Romney, is an American businessman. He was the 70th Governor of Massachusetts serving from 2003 to 2007. He ran for the Republican Party nomination in the 2008 election, but lost the nomination to United States senator John McCain of Arizona.

Romney would run again for the nomination only this time winning the nomination beating former Pennsylvania Senator Rick Santorum and former Speaker Newt Gingrich. His running mate was U.S. Representative Paul Ryan of Wisconsin. He ran against the incumbent President Barack Obama. He lost the election winning 206 of the electoral college to Obama's 332.

In the aftermath of the election, Romney remained low in politics and in the 2016 presidential election, Romney was a critic of Donald Trump and would endorse former Governor Gary Johnson of the Libertarian Party. After the election of Trump, it was thought that Trump would pick Romney as Secretary of State, but the position went to businessman Rex Tillerson.

After the retirement of Utah Senator Orrin Hatch, on February 16, 2018, Romney became a candidate for the United States senate in the 2018 Utah United States Senate election. In June 2018, Romney won the Republican nomination for the Senate seat.

Romney was born in Detroit. His father, George Romney, was an auto executive and Governor of Michigan and his mother Lenore Romney, was an actress and politician. When Mitt was young, he served a Mormon mission in France. Romney graduated from Brigham Young University, in 1971, and later went to Harvard Business School and Harvard Law School. In the 1980s, Romney was one of the leaders of Bain Capital, a company that bought other companies and tried to make them more profitable. In 1994, Romney ran for the United States Senate against Ted Kennedy, but lost. Romney was in charge of the Salt Lake Organizing Committee, which helped run the 2002 Winter Olympics in Salt Lake City, Utah. Romney took over the committee after a scandal where some people were being bribed.

He ran for President in 2008, but the Republican Party nominated John McCain instead. He ran again in 2012 and was nominated to be the main Republican candidate against President Barack Obama, but lost the election.

Beginning of the campaign 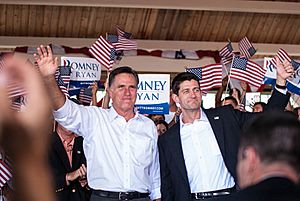 Mitt Romney and Paul Ryan in the presidential campaign, 2012

After winning the Republican Party presidential primaries in 2012, Mitt Romney took part of the United States presidential election. He won the primaries against its major rivals Ron Paul and Newt Gingrich. Right after his winning in the republican primaries and access to the 2012 presidential campaign, Mitt Romney has been critiqued by the Democratic Party (United States) for being part in the board of directors for the company Bain Capital Inc. from 1999 to 2002. During these three years, purchases of different companies by Bain Capital led to relocation of high-tech jobs in the United States to Mexico and China. In these uncertain economic times, this charge was unpopular with the average American. The Democratic Party (United States) also revealed with the help of the American Broadcasting Company that Mitt Romney has bank accounts in the Cayman Islands which would allow him to stare money over U.S. tax laws . About this guilt, Mitt Romney said during his campaign in New Hampshire :"{…} if there's an opportunity to save taxes, we like anybody else in this country will follow that opportunity.”.

During the first televised debate of the presidential campaign, Mitt Romney accused President Obama of having plunged America into the deepest economic crisis since the 1930s. He also suggests that President Barack Obama had not met its promises during his presidential previous mandate like increase the real income of the average American family. Mitt Romney made a provision to which pleased many American citizens during the debate that allowed him to gain some points to national survey and even surpass Barack Obama in the voting intentions of Americans .

After the first debate, an internet site named www.motherjones.com revealed on Monday September. 17, 2012 a YouTube video of Mitt Romney talking about some people of the United States who live at the expense of the state. 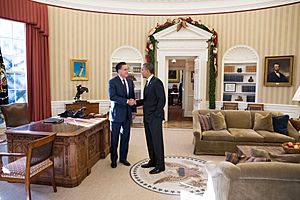 Romney and Obama Oval Office meeting after the defeat of Mitt

In this video he said: "There are 47 percent of the people who will vote for the president no matter what. All right, there are 47 percent who are with him, who are dependent upon government, who believe that they are victims, who believe the government has a responsibility to care for them, who believe that they are entitled to health care, to food, to housing, to you-name-it -- that that's an entitlement. And the government should give it to them. And they will vote for this president no matter what. ... These are people who pay no income tax. ... [M]y job is not to worry about those people. I'll never convince them they should take personal responsibility and care for their lives."

Conclusion of the 2012 presidential campaign

On the night of November 6, 2012, he announced that Barack Obama was re-elected as President of the United States of America and by extension Mitt Romney lost his chance to become president. He had received 206 votes against the 270 required to win.

On January 2, 2018, after Orrin Hatch announced he would retire, Romney changed his Twitter location from Massachusetts to Holladay, Utah opening the long speculation of Romney running for the Senate seat.

On February 16, 2018, Romney formally launched his campaign through a video message posted on Facebook and Twitter. He won the Republican nomination on June 26, 2018.

All content from Kiddle encyclopedia articles (including the article images and facts) can be freely used under Attribution-ShareAlike license, unless stated otherwise. Cite this article:
Mitt Romney Facts for Kids. Kiddle Encyclopedia.