The American Independent Party (AIP) is a far right political party in the United States that was established in 1967. The AIP is best known for its nomination of former Governor George Wallace of Alabama, who carried five states in the 1968 presidential election running on a segregationist “law and order” platform against Richard M. Nixon and Hubert H. Humphrey.

The party split in 1976 into the modern American Independent Party and the American Party. From 1992 until 2008, the party was the California affiliate of the national Constitution Party. Its exit from the Constitution Party led to a leadership dispute during the 2016 election.

Republican Party candidates Donald Trump and Mike Pence were nominated by the American Independent Party for the positions of president and vice president, respectively, in 2016. 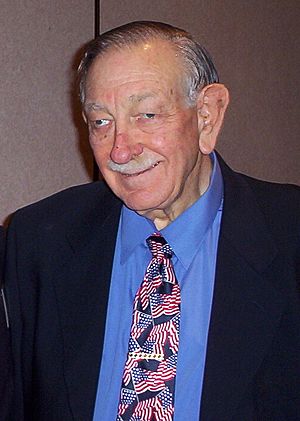 That year, it was made up of Democrats opposed to the ending of racial segregation and was most successful in Southern states (Wallace was governor of the Southern state of Alabama). Over time, the party became closer to the conservative movement and it renounced its policy against racial equality.

In 1969, representatives from forty states established the American Party as the successor to the American Independent Party. As of 2016, about 3% of California's 17.2 million voters are registered with the AIP, making the party the third-largest of California's political parties.

The party flag, adopted on August 30, 1970, depicts an eagle holding a group of arrows in its left talons, over a compass rose, with a banner which reads "The American Independent Party" at the eagle's base.

All content from Kiddle encyclopedia articles (including the article images and facts) can be freely used under Attribution-ShareAlike license, unless stated otherwise. Cite this article:
American Independent Party Facts for Kids. Kiddle Encyclopedia.