Ray Charles Leonard (born May 17, 1956), best known as "Sugar" Ray Leonard, is an American former professional boxer, motivational speaker, and occasional actor. Often regarded as one of the greatest boxers of all time, he competed from 1977 to 1997, winning world titles in five weight divisions; the lineal championship in three weight divisions; as well as the undisputed welterweight title. Leonard was part of "The Fabulous Four", a group of boxers who all fought each other throughout the 1980s, consisting of Leonard, Roberto Durán, Thomas Hearns, and Marvin Hagler.

"The Fabulous Four" created a wave of popularity in the lower weight classes that kept boxing relevant in the post–Muhammad Ali era, during which Leonard defeated future fellow International Boxing Hall of Fame inductees Hearns, Durán, Hagler, and Wilfred Benítez. Leonard was also the first boxer to earn more than $100 million in purses, and was named "Boxer of the Decade" in the 1980s. The Ring magazine named him Fighter of the Year in 1979 and 1981, while the Boxing Writers Association of America (BWAA) named him Fighter of the Year in 1976, 1979, and 1981. In 2002, Leonard was voted by The Ring as the ninth greatest fighter of the last 80 years; BoxRec ranks him as the 23rd greatest boxer of all time, pound for pound.

Leonard, the fifth of seven children of Cicero and Getha Leonard, was born in Wilmington, North Carolina. He was named after Ray Charles, his mother's favorite singer. The family moved to Washington, D.C., when he was three, and they settled permanently in Palmer Park, Maryland when he was ten. His father worked as a supermarket night manager and his mother was a nurse. He attended Parkdale High School, Leonard was a shy child, and aside from the time he nearly drowned in a creek during a flood in Seat Pleasant, Maryland, his childhood was uneventful. He stayed home a lot, reading comic books and playing with his dog. His mother said: "He never did talk too much. We never could tell what he was thinking. But I never had any problems with him. I never had to go to school once because of him." 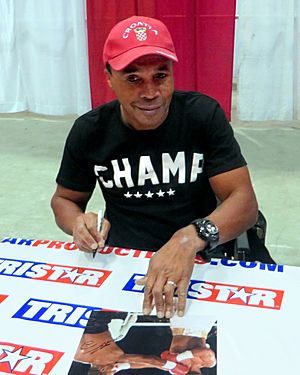 Leonard married his high school sweetheart, Juanita Wilkinson, in January 1980. Their six-year-old son, Ray Jr., served as the ring bearer. In 1984, they had another son, Jarrell. They were divorced in 1990.

In 1989, Leonard was introduced to Bernadette Robi by Kenny G at a Luther Vandross concert. Robi is the daughter of Paul Robi, one of the original Platters, and she is the ex-wife of Lynn Swann. Leonard and Robi were married at Leonard's $8.7 million estate in Pacific Palisades, California in August 1993. At the wedding ceremony, the grounds were converted into a garden with 10,000 roses and blossoms of other flowers flown in from the Netherlands.

Leonard is also the godfather of Khloé Kardashian and has appeared on many episodes of Keeping Up With The Kardashians. 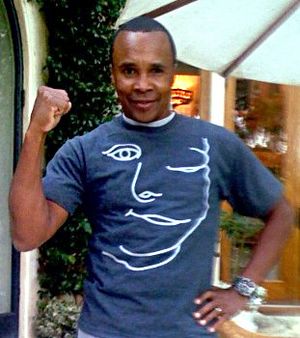 All content from Kiddle encyclopedia articles (including the article images and facts) can be freely used under Attribution-ShareAlike license, unless stated otherwise. Cite this article:
Sugar Ray Leonard Facts for Kids. Kiddle Encyclopedia.