University of Maryland facts for kids 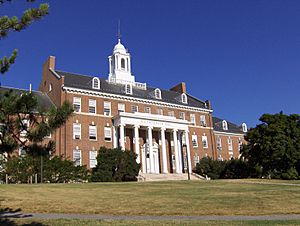 In 1856, the Maryland Agricultural College was chartered. Sixty years later, the state of Maryland took control of the college and renamed it Maryland State University. In 1920, it joined several professional schools in the area to become the University of Maryland. It joined the Association of American Universities in 1925.

All content from Kiddle encyclopedia articles (including the article images and facts) can be freely used under Attribution-ShareAlike license, unless stated otherwise. Cite this article:
University of Maryland Facts for Kids. Kiddle Encyclopedia.