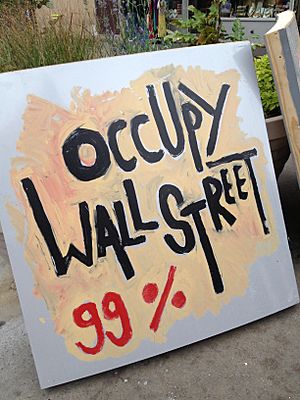 With its rhetoric of "the 99%" (the people) against "the 1%" (the elite), the international Occupy movement was an example of a populist social movement

The Populist Movement, also known as the People's Party was a movement in late-19th century America. It grew out of groups such as the Grange Movement. It was largely a movement of farmers, who were poor and felt big businesses, such as railroads, were to blame. Its leaders included Thomas Watson and William Jennings Bryan. The populists had a series of demands known as the Omaha Platform. Here are some of the things the Omaha Platform wanted:

Though the Populists never and only controlled a few state governments for a few years, many of the demands of the Omaha Platform, such as the income tax and direct election of Senators, were later done as part of the Progressive Movement

All content from Kiddle encyclopedia articles (including the article images and facts) can be freely used under Attribution-ShareAlike license, unless stated otherwise. Cite this article:
Populist Movement Facts for Kids. Kiddle Encyclopedia.