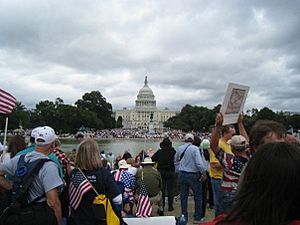 Tea Party protesters fill the West Lawn of the U.S. Capitol and the National Mall on September 12, 2009.

The Tea Party is an American populist political movement. Most people say it is conservative and libertarian.

The name "Tea Party" comes from the Boston Tea Party, a protest by colonists who objected to a British tax on tea in 1773. They demonstrated by dumping British tea taken from docked ships into the harbor. Some say that the Tea in "Tea Party" also stands for "Taxed Enough Already".

The Tea Party movement has caucuses (groups) in the House of Representatives and the Senate of the United States. Many of the members of the Tea Party caucus were first elected in the 2010 midterm elections. Some of them had never held any public office before.

The Tea Party's most famous national figures include Republican politicians such as Sarah Palin, Ron Paul, and Michele Bachmann. As of 2010, the Tea Party movement is not a national political party, but has endorsed Republican candidates.

A Gallup poll shows almost 80% of Tea Partiers say they are Republicans. Commentators, including Gallup Editor-in-Chief Frank Newport, have suggested that the movement is not a new political group but simply a rebranding of traditional Republican candidates and policies. An October 2010 Washington Post canvass of local Tea Party organizers found 87% saying "dissatisfaction with mainstream Republican Party leaders" was "an important factor in the support the group has received so far". Though many are opposed to GOP leadership, they are even more opposed to President Obama. Some members believe that President Obama was not born in the United States (despite a birth certificate showing he was born in Hawaii).

One of the main positions the Tea Party took was against the debt ceiling (the amount of money the U.S. is allowed to borrow). Many voted against any raising of the debt ceiling. Others demanded large spending cuts and a balanced budget amendment to the U.S. Constitution.

All content from Kiddle encyclopedia articles (including the article images and facts) can be freely used under Attribution-ShareAlike license, unless stated otherwise. Cite this article:
Tea Party movement Facts for Kids. Kiddle Encyclopedia.