The Boston Tea Party was a political protest by the Sons of Liberty in Boston, Massachusetts, on December 16, 1773. The target was the Tea Act of May 10, 1773, which allowed the British East India company to sell tea from China in American colonies without paying taxes apart from those imposed by the Townshend Acts.

American Patriots strongly opposed the taxes in the Townshend Act as a violation of their rights. Demonstrators, some disguised as Native Americans, destroyed an entire shipment of tea sent by the East India Company.

They boarded the ships and threw the chests of tea into the Boston Harbor. The British government responded harshly and the episode escalated into the American Revolution which began near Boston in 1775. The Tea Party became an iconic event of American history, and since then other political protests such as the Tea Party movement have referred to themselves as historical successors to the Boston protest of 1773. 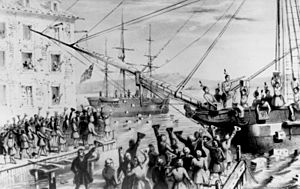 An engraving of American colonists dressed as Native Americans throwing 342 trunks of the cargo that was on the British tea ships into Boston Harbor on December 16, 1773

The Stamp Act of 1765 and the Townshend Acts of 1767 angered colonists regarding British decisions on taxing the colonies with no representation in the Westminster Parliament ("no taxation without representation"). One of the protesters was John Hancock. In 1768, his ship Liberty was seized by customs officials and he was charged with smuggling. He was defended by John Adams and the charges were eventually dropped. However, Hancock later faced several hundred more accusations. 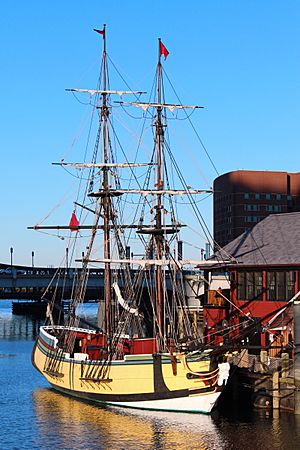 Hancock organized a boycott of tea from China sold by the British East India Company, whose sales in the colonies then fell from 320,000lb to 520lb. By 1773, the company had large debts, huge stocks of tea in its warehouses and no prospect of selling it because smugglers such as Hancock were importing tea without paying taxes (import tax). The British government passed the Tea Act, which allowed the East India Company to sell tea to the colonies directly, thereby allowing them to sell for lower prices than those offered by the colonial merchants and smugglers.

The ships carrying tea were prevented from landing as most American ports turned the tea away. Protesters had successfully prevented the unloading of tea in three other colonies, but in Boston, the Royal Governor Thomas Hutchinson refused to allow the tea to be returned to Britain, Governor Hutchinson was determined to hold his ground. He convinced the tea consignees, two of whom were his sons, not to back down.

The East India Company with the help of the British-appointed governor made plans to bring in — by force — the tea under the protection given by British armed ships. Governor Thomas Hutchinson had been urging London to take a hard line with the Sons of Liberty. If he had done what the other royal governors had done and let the ship owners and captains resolve the issue with the colonists, Dartmouth, Eleanor and Beaver would have left without unloading any tea. 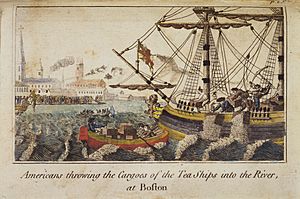 On December 16, 1773, the evening before the tea was supposed to be landed, the Sons of Liberty, three groups of 50 Boston residents each organized by Samuel Adams, burst from the Old South Meeting House and headed toward Griffin's Wharf. Three ships — the Dartmouth, the Eleanor and the Beaver — were loaded with hundreds of crates of tea. The men boarded the ships and began destroying the cargo. By 9pm they had opened 342 crates of tea in all three ships and had thrown them into Boston Harbor. 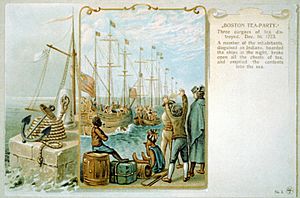 They took off their shoes, swept the decks, and made each ship's first mate agree to say that the Sons of Liberty had destroyed only the tea. The whole event was remarkably quiet and peaceful. The next day, they sent someone around to fix the one padlock they had broken.

John Adams and many other Americans considered tea drinking to be unpatriotic following the Boston Tea Party. Tea drinking declined during and after the Revolution, resulting in a shift to coffee as the preferred hot drink. 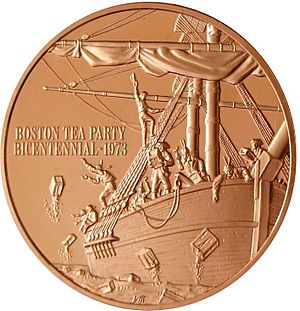 Whether or not Samuel Adams helped plan the Boston Tea Party is disputed, but he immediately worked to publicize and defend it. He argued that the Tea Party was not the act of a lawless mob, but was instead a principled protest and the only remaining option the people had to defend their constitutional rights, the issue was never the tax but how the tax was passed without American input; United States Congress taxed tea from 1789 to 1872.

This act brought criticism from both colonial and British officials. For instance, Benjamin Franklin stated that the destroyed tea must be repaid and offered to repay with his own money. The British government responded harshly by closing the port of Boston and put in place other laws that were known as the "Intolerable Acts", also called the Coercive Acts.

This act proved to be one of those that led to the American Revolution. At the very least, the Boston Tea Party and the reaction that followed served to rally support for revolutionaries in the thirteen colonies who were eventually successful in their fight for independence. 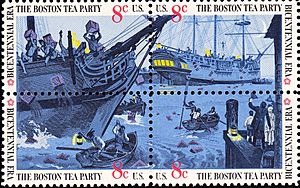 In 1973 the US Post Office issued a set of four stamps, together making one scene of the Boston Tea Party

American activists from a variety of political viewpoints have used the Tea Party as a symbol of protest. In 1973, on the 200th anniversary of the Tea Party, a mass meeting called for the impeachment of President Richard Nixon and protested oil companies in the ongoing oil crisis. Afterwards, protesters boarded a replica ship in Boston Harbor and dumped several empty oil drums into the harbor.

In 1998, two conservative US Congressmen put the federal tax code into a chest marked "tea" and dumped it into the harbor.

The Boston Tea Party Museum is located on the Congress Street Bridge in Boston. It features reenactments, a documentary, and a number of interactive exhibits. The museum features two replica ships of the period, Eleanor and Beaver. Additionally, the museum possesses one of two known tea chests from the original event, part of its permanent collection.

All content from Kiddle encyclopedia articles (including the article images and facts) can be freely used under Attribution-ShareAlike license, unless stated otherwise. Cite this article:
Boston Tea Party Facts for Kids. Kiddle Encyclopedia.