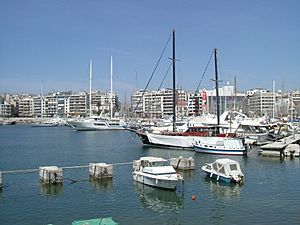 Harbour means to shelter or keep safe. A harbor (or harbour) is a place where ships may shelter. A port is also a harbour, but is usually bigger. The port will often contain a water space with breakwarers around the edge, a number of quays or piers where the ships may be moored or tied up and a transport system for taking goods inland. Often railway and road transport will be used. Goods also move by pipeline transport and by smaller ships on rivers.

Harbors can be natural as in San Francisco or artificial as in ancient Carthage or a mix of both. During the D-Day operations of 1944, two artificial harbors (named mulberry) were built just off the beaches where the invasion was going to happen.

All content from Kiddle encyclopedia articles (including the article images and facts) can be freely used under Attribution-ShareAlike license, unless stated otherwise. Cite this article:
Harbor Facts for Kids. Kiddle Encyclopedia.