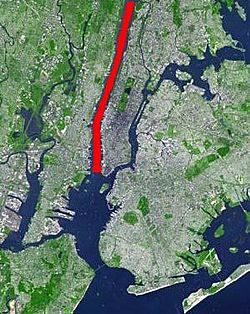 The Hudson looking south from atop the Hudson Palisades, anachronistically referred to by some as the North River

North River is an alternative name for the southernmost portion of the Hudson River in the vicinity of New York City and northeastern New Jersey in the United States. The entire watercourse was known as the North River by the Dutch in the early seventeenth century; the term fell out of general use for most of the river's 300+ mile course during the early 1900s. However the name remains in very limited use as an artifact among history-inclined local mariners and others and on some nautical charts and maps. The term is also used for infrastructure on and under the river, such as the North River piers, North River Tunnels, and the North River Wastewater Treatment Plant. 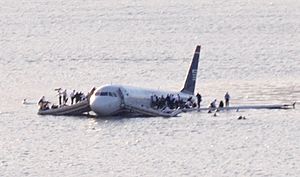 At different times "North River" has referred to:

Its history is strongly connected to shipping industry in the Port of New York and New Jersey, which shifted primarily to Port Newark in the mid-20th century due to the construction of the Holland Tunnel and other river crossings and the advent of containerization.

The names for the lower portion of the river appear to have remained interchangeable for centuries. In 1909, two tunnels were under construction: one was called the North River Tunnels, the other, the Hudson Tubes. That year the Hudson–Fulton Celebration was held, commemorating Henry Hudson, the first European to record navigating the river, and Robert Fulton, the first man to use a paddle steamer in America, named the North River Steamboat, to sail up it, leading to controversy over what the waterway should be called.

Much of the shoreline previously used for maritime, rail, and industrial activities has given way to recreational promenades and piers. On the Hudson Waterfront in New Jersey, the Hudson River Waterfront Walkway runs for about 18 miles. In Manhattan, the Hudson River Park runs from Battery Park to 59th Street.

Origin of the name and early usage 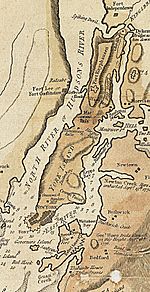 The origin of the name North River is generally attributed to the Dutch. In describing the major rivers in the New Netherland colony, they called what is now the Hudson the North River, the Connecticut the Fresh River, and the Delaware the South River. Another theory is that the "North" River and "East" River were so named for the direction of travel they permitted once having entered the Upper New York Bay.

In 1808 the Secretary of the Treasury, Albert Gallatin, issued his report of proposed locations for transportation and communication internal improvements of national importance. The North River figures prominently among his proposals as the best route toward western and northern lands; similar routes were chosen for the Erie Canal and other early canals built by the state of New York. He notes the following in reference to the North and Hudson Rivers:

What is called the North River is a narrow and long bay, which in its northwardly course from the harbor of New York breaks through or turns all the mountains, affording a tide navigation for vessels of eighty tons to Albany and Troy, one hundred and sixty miles above New York. This peculiarity distinguishes the North River from all the other bays and rivers of the United States. The tide in no other ascends higher than the granite ridge or comes within thirty miles of the Blue Ridge or eastern chain of mountains. In the North River it breaks through the Blue Ridge at West Point and ascends above the eastern termination of the Catskill or great western chain.

A few miles above Troy, and the head of the tide, the Hudson from the north and the Mohawk from the west unite their waters and form the North River. The Hudson in its course upwards approaches the waters of Lake Champlain, and the Mohawk those of Lake Ontario. 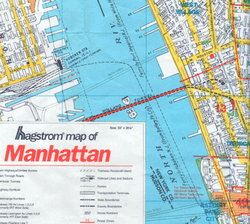 North River label of a stretch of the Hudson River between Hudson County, New Jersey, and Lower Manhattan on a 1997 Hagstrom Map of Manhattan

The National Oceanic and Atmospheric Administration's current charts call the lower river the "Hudson", and the United States Geological Survey lists "North River" as an alternative name of the Hudson River without qualifying it as any particular portion of the river.

Hagstrom Maps, formerly the leading mapmaker in the New York metropolitan area and known for occasional quirky and anachronistic names, features, and artifacts on their maps, has labeled all or part of the Hudson adjacent to Manhattan as "North River" on several of its products. For instance, on a 1997 Hagstrom Map of Manhattan, the stretch of river between Hudson County, New Jersey, and Lower Manhattan (roughly corresponding to the location of the North River piers) was labeled "North River", with the label "Hudson River" used above Midtown Manhattan.

Piers along the Hudson shore of Manhattan were formerly used for shipping and berthing ocean-going ships. In shipping notices, they were designated as, for example, "Pier 14, North River". As with the river, the name "North River piers" has largely been supplanted by "Hudson River piers", or just by a pier and number, e.g., "Pier 54". Pier 40 is located at Houston Street, and the numbering of the piers to the north correspond to the nearest numbered street plus 40 – thus, for example, North River Pier 86 is at West 46th Street.

Most of the piers that once existed in lower Manhattan fell into disuse or were destroyed in the last half of the 20th century. The remaining piers are Pier A at the Battery and piers ranging from Pier 25 at North Moore Street to Pier 99 at 59th Street. Many of these piers and the waterfront between them are part of the Hudson River Park which stretches from 59th Street to the Battery. The park, a joint project between New York City and New York State commenced in 1998, consists of several non-contiguous parcels of land and piers totaling 125 acres (0.51 km2), plus another 400 acres (1.6 km2) of the river itself. Several piers were rebuilt for adaptive re-use as part of the park project, with approximately 70% of the planned work complete by 2011. 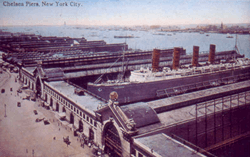 Chelsea Piers, with the Lusitania docked, circa 1910 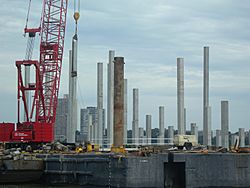 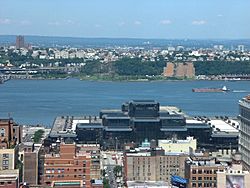 Javits Center, behind which is located New York Waterway's Midtown Ferry Terminal at Pier 79. The Weehawken Yards were across the river at the base of the Hudson Palisades. 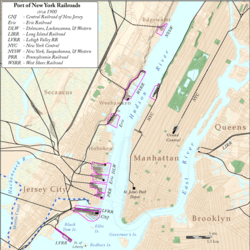 Railroad and ferry terminals along the North River circa 1900

Prior to the opening of the North River Tunnels and the Hudson and Manhattan Railroad tubes in the early 1900s, passengers and freight were required to cross the river for travel to points east. This led to an extensive network of intermodal terminals, railyards, ferry slips, docks, barges, and carfloats. The west shore of the river from the mid 19th to the mid 20th century was home to expansive facilities operated by competing railroads. Most are now gone, allowing for public access to the waterfront at piers, parks, promenades and marinas along the Hudson River Waterfront Walkway. New ferry slips and terminals exclusively for pedestrian use have been built.

The last crossing to be built was the south tube of the Lincoln Tunnel in 1957, but in 1962, another deck was added to the George Washington Bridge. Since 2003, various proposals have been made to add a new train line. This includes an extension of the completed 7 Subway Extension, the canceled Access to the Region's Core, and the proposed Gateway Project.

All content from Kiddle encyclopedia articles (including the article images and facts) can be freely used under Attribution-ShareAlike license, unless stated otherwise. Cite this article:
North River (Hudson River) Facts for Kids. Kiddle Encyclopedia.