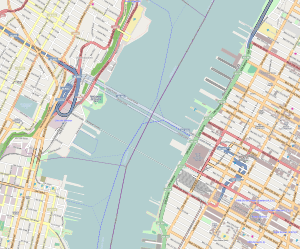 Course of the Lincoln Tunnel under the Hudson River 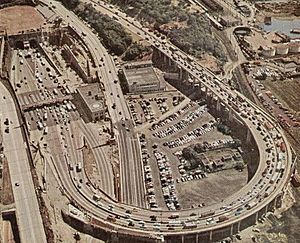 Lincoln Tunnel Weehawken helix and entrance 1955, with the south tube under construction

The Lincoln Tunnel is an approximately 1.5-mile-long (2.4 km) set of three tunnels under the Hudson River, connecting Weehawken, New Jersey and Midtown Manhattan in New York City. An integral conduit within the New York Metropolitan Area, it was designed by Norwegian-born civil engineer Ole Singstad and named after U.S. President Abraham Lincoln. It is one of two automobile tunnels built under the river, the other being the Holland Tunnel. The Lincoln Tunnel carries a daily average of approximately 120,000 motor vehicles.

The tunnel was originally to be named Midtown Vehicular Tunnel, but the planners eventually decided that the new tunnel deserved a name that was of similar importance to that of the George Washington Bridge, and named it after Abraham Lincoln.

Designed by Ole Singstad, the tunnel was funded by the New Deal's Public Works Administration. Construction began on the first tube (now the center of the three tubes) in March 1934. It opened to traffic on December 22, 1937, charging $0.50 per passenger car, equal to $7.42 today. The cost of construction was $85 million, equal to $1.35 billion today.

The original design called for two tubes. Work on a second tube, north of the first one, was halted in 1938 but resumed in 1941. Due to war material shortages of metal, completion was delayed for two years. It opened on February 1, 1945, with Michael Catan, brother of Omero Catan (known as Mr. First, attending over 526 opening day events), selected to be the first to lead the public through the tube.

A third tube was proposed by the Port Authority of New York and New Jersey due to increased traffic demand but initially opposed by the City of New York, which was trying to get the Port Authority to help pay for the road improvements that the City would need to handle the additional traffic. Eventually, a compromise was worked out, and the third tube opened on May 25, 1957 to the south of the original two tunnels. Although the three portals are side by side in New Jersey, in New York City the north tube portal is near Eleventh Avenue between 38th and 39th Streets. This portal is one block west of the other two tunnels' portals, which emerge side by side at Tenth Avenue between 38th and 39th Streets.

In 2012—the 75th anniversary of the Lincoln Tunnel and 85th anniversary of the Holland Tunnel in nearby Jersey City—the Hoboken Historical Museum held an exhibit in its Main Gallery called Driving Under the Hudson: The History of the Holland and Lincoln Tunnels, which explores the two tunnels' histories, and how they affected the region. Rutgers University professor Angus Gillespie, who wrote the 2011 book, Crossing Under the Hudson: The Story of The Holland and Lincoln Tunnels, served as a consultant for the exhibit's design.

The three tubes comprise six traffic lanes in total and carries a combined total of almost 108,000 vehicles per day. During the morning rush hour, one traffic lane in the center tube called the "XBL" (exclusive bus lane) is used only by buses. The New Jersey approach roadway, locally known as The Helix, turns in a final half-circle before arriving at the toll booths in front of the tunnel portals. In Manhattan, Dyer Avenue and the Lincoln Tunnel Expressway serve as the primary egress roadways for the Lincoln Tunnel. Although the center tube normally provides one travel lane in each direction, both of the travel lanes in the tunnel's center tube are reversible and can be configured for peak-hour traffic demand if needed.

Normally, only motor traffic uses the tunnel, but every year, a few bicycle tours and foot races pass through by special arrangement.

The XBL is by far the busiest and most productive bus lane in the United States. The lane operates weekday mornings accommodating approximately 1,700 buses and 62,000 commuters, mainly to the Port Authority Bus Terminal. The ridership on the buses using the XBL is higher than that on New Jersey Transit's commuter rail into Penn Station.

With the cancellation of the Mid-Manhattan Expressway, intended to carry Interstate 495 through New York City to the Queens-Midtown Tunnel and the Long Island Expressway, the NYSDOT and NJDOT demoted the Lincoln Tunnel, Queens-Midtown Tunnel, and the freeway link to NJ 3 as state routes. Some signs still list the tunnels as I-495. Although the Federal Highway Administration still considers the Midtown Tunnel to be an Interstate, the Lincoln Tunnel is no longer on the Interstate system. In New Jersey, the freeway was officially demoted to NJ 495 and very few signs still read "I-495". In Manhattan, 34th Street links NY/NJ 495 and I-495. 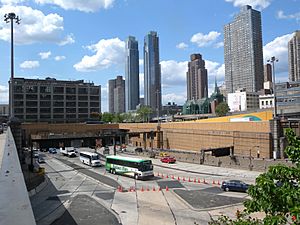 Manhattan portals of the south and center tubes 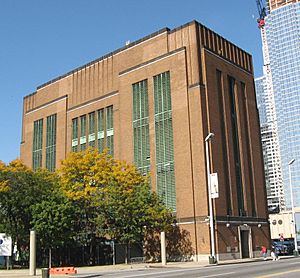 Historically, the tolls were:

All content from Kiddle encyclopedia articles (including the article images and facts) can be freely used under Attribution-ShareAlike license, unless stated otherwise. Cite this article:
Lincoln Tunnel Facts for Kids. Kiddle Encyclopedia.