Kids Encyclopedia Facts
Not to be confused with Midtown Tunnel (Virginia).

The Queens–Midtown Tunnel (also sometimes called the Midtown Tunnel) is a vehicular tunnel under the East River in New York City, connecting the boroughs of Manhattan and Queens. The tunnel consists of a pair of tubes, each carrying two lanes. The west end of the tunnel is located on the East Side of Midtown Manhattan, while the east end of the tunnel is located in Long Island City in Queens. The tunnel carries Interstate 495 (I-495) for its entire length; I-495's western terminus is at the Manhattan portal of the tunnel.

The Queens–Midtown Tunnel was first planned in 1921, though the plans for the tunnel were modified over the following years. By the 1930s, the tunnel was being proposed as the Triborough Tunnel, which would connect Queens and Brooklyn with the east and west sides of Manhattan. The New York City Tunnel Authority finally started construction on the tunnel in 1936, although by then, the plans had been downsized to a connector between Queens and the east side of Manhattan. The tunnel, designed by Ole Singstad, was opened to traffic on November 15, 1940.

The Queens–Midtown Tunnel is owned by New York City and operated by MTA Bridges and Tunnels, an affiliate agency of the Metropolitan Transportation Authority. It is used by several dozen express bus routes. From 1981 to 2016, the Queens–Midtown Tunnel was also the site of the Ringling Bros. and Barnum & Bailey Circus Animal Walk. 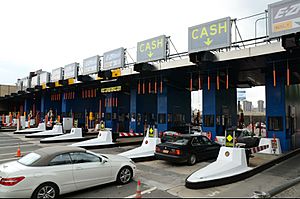 Toll plaza at the Queens end

When planning began, a bridge was strongly supported by some backers, including Robert Moses, who balked at the increased cost of a tunnel and the fact that it would not be completed in time for the 1939 World's Fair. Manhattan borough president Samuel Levy in particular was a strong backer of a six-lane bridge plan. Commissioner William Friedman of the New York City Tunnel Authority rejected the alternative outright. The Ole Singstad-designed tunnel was opened to traffic on November 15, 1940.

From 1981 to 2011, the tunnel was closed to traffic for a few hours one night each spring to allow for the annual Ringling Bros. and Barnum & Bailey Circus Animal Walk. Several nights before the circus opened at Madison Square Garden, the elephants marched into Manhattan and down 34th Street to the arena. While this event was a much anticipated annual tradition for some, in recent years it attracted organizations protesting the treatment of the circus animals. When the circus moved to the Barclays Center in 2012, the elephant walk through the tunnel ceased.

In the 1997 feature film Men in Black, Tommy Lee Jones and Will Smith star in a scene in which their Ford LTD car rides upside down on the ceiling of the tunnel.

Open-road cashless tolling started on January 10, 2017 at 3 am. The tollbooths will be gradually dismantled, and drivers will no longer be able to pay cash at the tunnel. Instead, there will be cameras mounted onto new overhead gantries near where the booths are currently located. Drivers without E-ZPass will have a picture of their license plate taken, and the toll will be mailed to them. For E-ZPass users, sensors will detect their transponders wirelessly.

All content from Kiddle encyclopedia articles (including the article images and facts) can be freely used under Attribution-ShareAlike license, unless stated otherwise. Cite this article:
Queens–Midtown Tunnel Facts for Kids. Kiddle Encyclopedia.