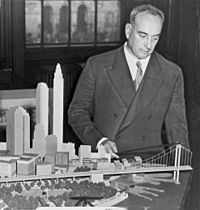 Robert Moses (December 18, 1888 – July 29, 1981) was an American urban planner and politician. He worked mainly in the New York metropolitan area. He was known as the "master builder" of mid-20th century New York City, Long Island, Rockland County, and Westchester County. His works helped modernized and shape the Manhattan skyline.

From 1927 to 1929, Moses was the Secretary of State of New York. In 1934, he was the Republican nominee for Governor. He lost the election to Herbert H. Lehman.

All content from Kiddle encyclopedia articles (including the article images and facts) can be freely used under Attribution-ShareAlike license, unless stated otherwise. Cite this article:
Robert Moses Facts for Kids. Kiddle Encyclopedia.