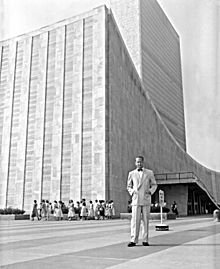 The 2nd Secretary-General of the United Nations, Dag Hammarskjöld in front of the General Assembly building (1950s)

A ceremony to celebrate the start of the building construction took place on September 14, 1948. Four companies from Manhattan and Queens were selected to construct the Building. The construction cost is around $30 million.

The Secretariat Building has 39 stories and was completed in 1952. The Building was designed by the Brazilian architect Oscar Niemeyer and the Swiss-French architect Le Corbusier. Secretariat Building is linked to another building called the Conference Building to the north. The Conference Building houses the United Nations General Assembly and the United Nations Security Council. The Secretrait building is also linked to a library building to the south.

The Secretariat Building was renovated in 2010s. The renovation started in May 2010. The building reopened in phases starting in July 2012.

On October 29, 2012, there was flooding in the basement of the building. This is due to Hurricane Sandy. The flood caused a three-day closure of the building and some offices were moved to other locations.

All content from Kiddle encyclopedia articles (including the article images and facts) can be freely used under Attribution-ShareAlike license, unless stated otherwise. Cite this article:
United Nations Secretariat Building Facts for Kids. Kiddle Encyclopedia.