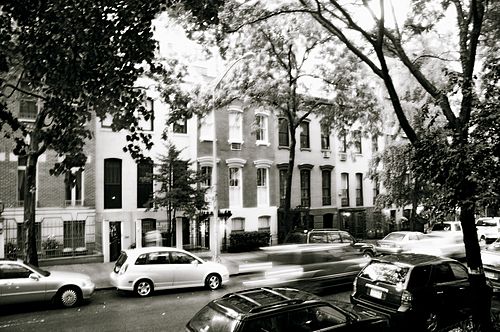 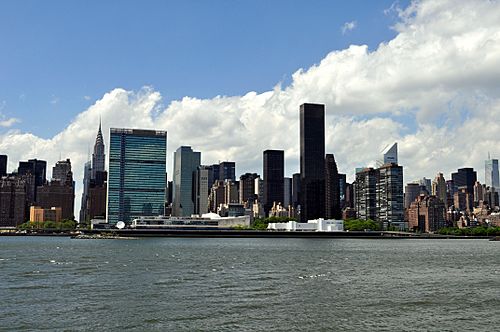 Turtle Bay is a neighborhood in New York City, on the east side of Midtown Manhattan. It extends from either 41st or 43rd Streets to 53rd Street, and eastward from Lexington Avenue to the East River's western branch, facing Roosevelt Island.

The neighborhood is the site of the headquarters of the United Nations and the Chrysler Building. The Tudor City apartment complex is also considered to be within Turtle Bay.

Turtle Bay, a cove of the East River, received its name in the 17th century by its resemblance in shape to that of a knife, "deutal" being Dutch for "knife". The cove, which was filled in after the Civil War, was a valuable shelter from the often harsh weather on the river, and became a thriving site for shipbuilding.

The Turtle Bay neighborhood was originally a 40-acre (16 ha) land grant given to two Englishmen by the Dutch colonial governor of New Amsterdam in 1639, and named "Turtle Bay Farm". The farm extended roughly from what is now 43rd Street to 48th Street, and from Third Avenue to the river. 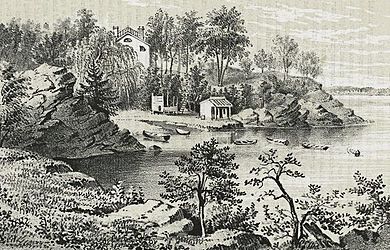 On a knoll overlooking the cove, near 41st Street, the farmhouse was purchased as a summer retreat by Francis Bayard, and in the early 19th century remained the summer villa of Francis Bayard Winthrop. Turtle Creek, or DeVoor's Mill Creek as it was known, emptied into the cove at what is now 47th Street. To the south lay Kip's Bay farm; to the north, on a bluff, stood James Beekman's "Mount Pleasant", the first of a series of houses and villas with water views stretching away up the shoreline. After the street grid system was initiated in Manhattan, the hilly landscape of the Turtle Bay Farm was graded to create cross-streets and the land was subdivided for residential development.

An army enrollment office was established at Third Avenue and 46th Street, after the first Draft Act was passed during the American Civil War. On July 13, 1863, an angry mob burned the office to the ground and proceeded to riot through the surrounding neighborhood, destroying entire blocks. The New York Draft Riots continued for three days before army troops managed to contain the mob, which had burned and looted much of the city.

After the war ended, the formerly pastoral neighborhood was developed with brownstones. By 1868 the bay had been entirely filled in by commercial overdevelopment, packed with breweries, gasworks, slaughterhouses, cattle pens, coal yards, and railroad piers. By the early 20th century, Turtle Bay was "a riverside back yard" for the city, as the WPA Guide to New York City (1939) described it: "huge industrial enterprises— breweries, laundries, abattoirs, power plants— along the water front face squalid tenements not far away from new apartment dwellings attracted to the section by its river view and its central position. The numerous plants shower this district with the heaviest sootfall in the city— 150 tons to the square mile annually".

The huge Waterside Station, a power plant operated by the Consolidated Edison Company, producing 367,000 kilowatts of electricity in its coal-fired plant, marked the southern boundary of the neighborhood. There were also 18 acres (73,000 m2) of slaughterhouses along First Avenue. With an infusion of poor immigrants having had come in the later part of the 19th century, and the opening of the elevated train lines along Second and Third Avenues, the neighborhood went into decay with crumbling tenement buildings. 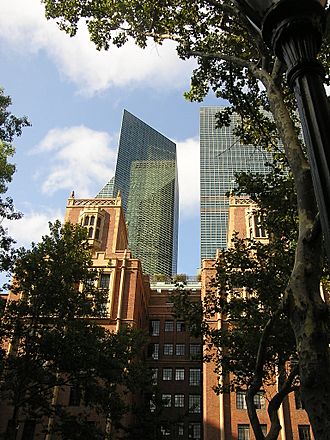 Many tenements were restored in the 1920s, and a large communal garden was established. Charlotte Hunnewell Sorchan saw promise in the run-down rowhouses of Turtle Bay; in 1918 she purchased eleven houses on the south side of 49th Street and nine on the north side of 48th Street, between 2nd and 3rd Avenues; within two years she had renovated the enclave called Turtle Bay Gardens. Her architects refaced the brownstone street-fronts with pale stucco, and rearranged the interiors so that service rooms faced the noisy street and living areas faced inwards, where the individual back yards were arranged so that each opens into to a common garden of trees and shrubs down the center. Having married Walton Martin, she then sold the houses to friends at cost, with property restrictions that kept the commons secure. Among the first purchasers was Maria Bowen Chapin, founder of the Chapin School. Celebrity residents since have included actors Katharine Hepburn, Ruth Gordon, June Havoc, Ricardo Montalban, and Tyrone Power; writer-director Garson Kanin, composer Stephen Sondheim; jurist Learned Hand, conductor Leopold Stokowski; editor Maxwell Perkins; publisher Henry Luce; journalist Dorothy Thompson; and writer/journalist E. B. White, who wrote Charlotte's Web when living on 48th Street. It was designated the Turtle Bay Gardens Historic District in 1966.

An area between First and Second Avenues, and 41st and 43rd Streets was known as "Goat Hill" – goats and squatters ruled the area – and later renamed "Prospect Hill". Prospect Hill developed into a shanty Irish community known as "Corcoran's Roost", founded by Jimmy Corcoran, in the 1850s, and later became known as a community with a high rate of violent crime and a haven for waterfront thieves such as the Rag Gang, during the late 19th century. From 1927 to 1932, the 2,800-unit Tudor City was built on this site, which was in 1988 named a historic district. 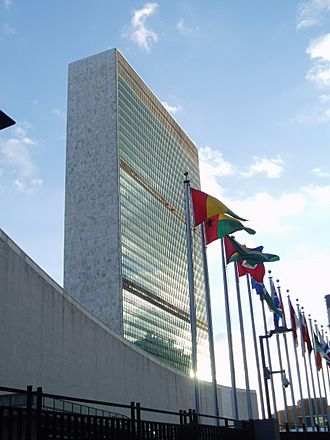 The clearing of the slaughterhouses for the construction of the UN headquarters in 1948, largely completed by 1952, and the removal of the elevated trains opened the neighborhood up for high-rise office buildings and condominiums. Concurrent with the UN headquarters' construction, the Ralph Bunche Park staircase was constructed, connecting Tudor City to the rest of Turtle Bay. Until the Third Avenue el was demolished in 1956, it was characterized by a blighted stretch of sooty darkness that had separated the neighborhood from Midtown Manhattan.

After the UN headquarters' expansion plan was originally announced in 2000, it was opposed by some Turtle Bay residents over concerns about the loss of the current Robert Moses Playground in order to build a long-sought new UN building on the site. In October 2011, city and state officials announced an agreement in which the UN would be allowed to build the tower adjacent to the existing campus on the current playground. In exchange, the United Nations would allow the construction of an esplanade along the East River that would complete the East River Greenway, a waterfront pedestrian and bicycle pathway. While host nation authorities have agreed to the provisions of the plan, it needs the approval of the United Nations in order to be implemented. The plan is similar in concept to an earlier proposal that had been announced in 2000 but did not move forward.

As of 2011[update] the neighborhood is about 0.403 square miles (1.04 km2) and has 24,611 residents. The median household income is $122,136, the median rent was $1,943, females slightly outnumbered males at a ratio of 13 to 11, and the median age was about 43 years. About 75% of residents were born in the U.S., the average household size was 1.7 people, and house and apartment prices averaged from $0.5 million to $1 million. Only one out of two households had a car due to the fact that this is close to Midtown Manhattan, where the majority of residents work.

The Turtle Bay Association, a neighborhood non-profit 501(c)3 organization, was founded in 1957 to protest, successfully, the widening of East 49th Street. It now serves as an advocate for residents of Turtle Bay, and maintains the neighborhood's quality of life. The Association's efforts have resulted in more park and landscaping development, creating the neighborhood's tree-lined and relatively quiet atmosphere.

The only major thoroughfare is the FDR Drive, at the neighborhood's eastern border. The Queens Midtown Tunnel (I-495) and Queensboro Bridge (NY 25) are located just south and north, respectively, of the neighborhood. 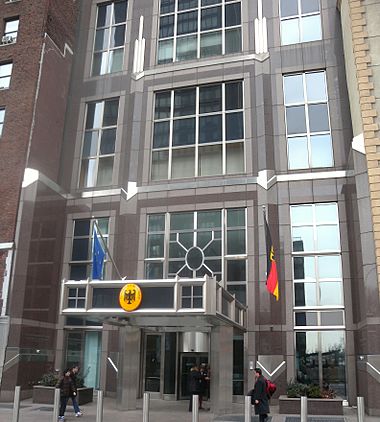 The German mission to the United Nations

Missions to the United States in Turtle Bay include:

Numerous missions to the United Nations are in Turtle Bay, close to the UN. They include:

All content from Kiddle encyclopedia articles (including the article images and facts) can be freely used under Attribution-ShareAlike license, unless stated otherwise. Cite this article:
Turtle Bay, Manhattan Facts for Kids. Kiddle Encyclopedia.