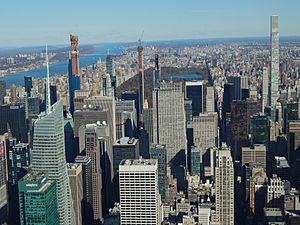 Midtown Manhattan looking north from the Empire State Building's 102nd floor (1,224 feet or 373 metres), November 2018. Bank of America Tower, left, then Central Park Tower (under construction), with recently completed 220 Central Park South behind it. In the center and both under construction are Steinway Tower and 53W53. On the right is 432 Park Avenue.

New York City skyscrapers are concentrated in Midtown and Downtown Manhattan, although other neighborhoods of Manhattan and the boroughs of Brooklyn, Queens, and the Bronx also contain some high-rises. As of June 2019[update], the entire city had 309 buildings that rise at least 500 feet (152 m) in height, including those under construction, more than any other city in the United States.

The history of skyscrapers in New York City began with the completion of the World Building in 1890; the structure rose to a pinnacle of 349 feet (106 m). Though not the city's first high-rise, it was the first building to surpass the 284-foot (87 m) spire of Trinity Church. The World Building, which stood as the tallest in the city until 1899, was demolished in 1955 to allow for the construction of an expanded entrance to the Brooklyn Bridge.

New York has played a prominent role in the development of the skyscraper; since 1890, eleven structures in the city have held the title of world's tallest. New York City went through a very early high-rise construction boom that lasted from the early 1910s through the early 1930s, during which 14 of the city's 100 tallest buildings were built—including the Woolworth Building, the Bank of Manhattan Trust Building, the Chrysler Building and the Empire State Building, each of which was the tallest in the world at the time of its completion, the last remaining so for forty years.

May 16, 2019 update of above panorama, to show new construction. Central Park Tower has risen significantly, on its way to 1,550 ft (472 m). The recently topped out, 1,427 ft (435 m), Steinway Tower can now be seen to the right of One57. Manhattan West and Hudson Yards are now complete. The Chrysler Building is now obscured by One Vanderbilt. 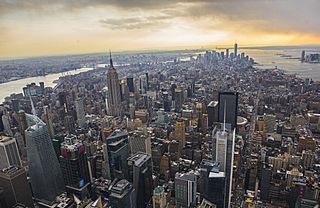 This list ranks completed and topped out New York City skyscrapers that stand at least 600 feet (183 m) tall, based on standard height measurements. This includes spires and architectural details but does not include antenna masts. An equal sign (=) following a rank indicates the same height between two or more buildings. An asterisk (*) indicates that the building is still under construction, but has been topped out. The "Year" column indicates the year in which a building was completed.      Was the world's tallest building upon completion

This lists ranks buildings in New York City based on pinnacle height measurement, which includes antenna masts. Standard architectural height measurement, which excludes non-architectural antennas in building height, is included for comparative purposes. An equal sign (=) following a rank indicates the same height between two or more buildings. The "Year" column indicates the year in which a building was completed. 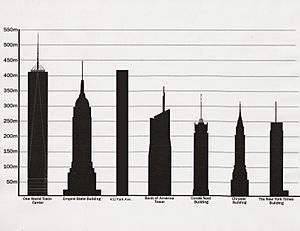 Tallest buildings in NYC, by pinnacle height, including all masts, antennae, poles, etc., whether architectural or not

Tallest buildings in each borough

This lists the tallest building in each borough of New York City based on standard height measurement. The "Year" column indicates the year in which a building was completed.

Tallest under construction or proposed

This lists buildings that are currently under construction in New York City and are expected to rise to a height of at least 600 feet (183 m). Buildings under construction that have already been topped out are also included, as are those whose construction has been suspended. For buildings whose heights have not yet been released by their developers, this table uses a floor count of 50 stories as the cutoff.

* Table entries with dashes (—) indicate that information regarding expected building heights or dates of completion has not yet been released.

This table lists buildings that are proposed for construction in New York City and are expected to rise at least 600 feet (183 m) in height. For buildings whose heights have not yet been released by their developers, this table uses a floor count of 50 stories as the cutoff.

* Table entries with dashes (—) indicate that information regarding building heights or dates of completion has not yet been released.

This table lists buildings in New York City that were destroyed or demolished and at one time stood at least 500 feet (152 m) in height.

All content from Kiddle encyclopedia articles (including the article images and facts) can be freely used under Attribution-ShareAlike license, unless stated otherwise. Cite this article:
List of tallest buildings in New York City Facts for Kids. Kiddle Encyclopedia.