520 Park Avenue is a skyscraper on East 60th Street near Park Avenue on the Upper East Side of Manhattan, New York City. It was designed by Robert A.M. Stern Architects and completed in 2018. The building was funded through a US$450 million construction loan from The Children's Investment Fund. At 781 ft (238 m) tall, it is the 36th tallest building in New York, and the tallest on the Upper East Side. 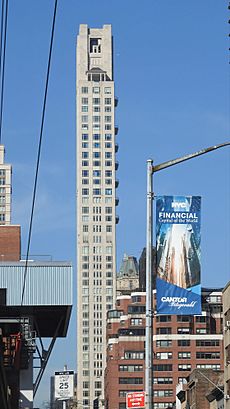 The developers had been planning a site on the building since 2006, but were delayed by difficulties vacating the previous commercial building on the site. Plans for the building were first announced in December 2012, with the selection of Robert A.M. Stern Architects. Shortly after, the developers purchased 70,000 square feet (6,500 m2) of air rights from the neighboring Christ Church United Methodist and Grolier Club for over $40 million. The building's design was officially unveiled in March 2014 and was completed in 2018.

The building has 35 apartments on its 64 stories including a $130 million triplex penthouse. Prices begin at over $20 million for a 4,600 square feet (430 m2) apartment, and residences close to the top have balconies.

The building includes an outside garden, private movie theater, children's playroom, swimming pool, wine cellars and a bi-level fitness center. The building offers "over 15,000 square feet (1,400 m2) of amenity space, perhaps the highest ratio of amenity-to-unit space of any building in the city."

All content from Kiddle encyclopedia articles (including the article images and facts) can be freely used under Attribution-ShareAlike license, unless stated otherwise. Cite this article:
520 Park Avenue Facts for Kids. Kiddle Encyclopedia.