Upper East Side facts for kids

The Upper East Side, sometimes abbreviated UES, is a neighborhood in the borough of Manhattan in New York City, bounded by 96th Street to the north, the East River to the east, 59th Street to the south, and Central Park/Fifth Avenue to the west. The area incorporates several smaller neighborhoods, including Lenox Hill, Carnegie Hill, and Yorkville. Once known as the Silk Stocking District, it has long been the most affluent neighborhood in New York City.

Before the arrival of Europeans, the mouths of streams that eroded gullies in the East River bluffs are conjectured to have been the sites of fishing camps used by the Lenape, whose controlled burns once a generation or so kept the dense canopy of oak–hickory forest open at ground level.

In the 19th century the farmland and market garden district of what was to be the Upper East Side was still traversed by the Boston Post Road and, from 1837, the New York and Harlem Railroad, which brought straggling commercial development around its one station in the neighborhood, at 86th Street, which became the heart of German Yorkville. The area was defined by the attractions of the bluff overlooking the East River, which ran without interruption from James William Beekman's "Mount Pleasant", north of the marshy squalor of Turtle Bay, to Gracie Mansion, north of which the land sloped steeply to the wetlands that separated this area from the suburban village of Harlem. Among the series of villas a Schermerhorn country house overlooked the river at the foot of present-day 73rd Street and another, Peter Schermerhorn's at 66th Street, and the Riker homestead was similarly sited at the foot of 75th Street. By the mid-19th century the farmland had largely been subdivided, with the exception of the 150 acres (61 ha) of Jones's Wood, stretching from 66th to 76th Streets and from the Old Post Road (Third Avenue) to the river and the farmland inherited by James Lenox, who divided it into blocks of houselots in the 1870s, built his Lenox Library on a Fifth Avenue lot at the farm's south-west corner, and donated a full square block for the Presbyterian Hospital, between 70th and 71st Streets, and Madison and Park Avenues. At that time, along the Boston Post Road taverns stood at the mile-markers, Five-Mile House at 72nd Street and Six-Mile House at 97th, a New Yorker recalled in 1893. 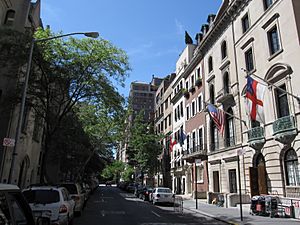 East 69th Street between Park and Madison Avenues, in the Upper East Side Historic District 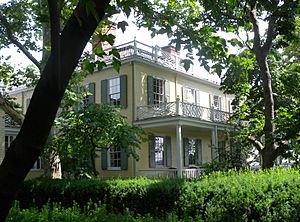 The fashionable future of the narrow strip between Central Park and the railroad cut was established at the outset by the nature of its entrance, in the southwest corner, north of the Vanderbilt family's favored stretch of Fifth Avenue from 50th to 59th Streets. A row of handsome townhouses was built on speculation by Mary Mason Jones, who owned the entire block bounded by 57th and 58th Streets and Fifth and Madison. In 1870 she occupied the prominent corner house at 57th and Fifth, though not in the isolation described by her niece, Edith Wharton, whose picture has been uncritically accepted as history, as Christopher Gray has pointed out.

It was her habit to sit in a window of her sitting room on the ground floor, as if watching calmly for life and fashion to flow northward to her solitary door... She was sure that presently the quarries, the wooden greenhouses in ragged gardens, the rocks from which goats surveyed the scene, would vanish before the advance of residences as stately as her own.

Before the Park Avenue Tunnel was covered (finished in 1910), fashionable New Yorkers shunned the smoky railroad trench up Fourth Avenue (now Park Avenue), to build stylish mansions and townhouses on the large lots along Fifth Avenue, facing Central Park, and on the adjacent side streets. The latest arrivals were the rich Pittsburghers Andrew Carnegie and Henry Clay Frick. The classic phase of Gilded Age Fifth Avenue as a stretch of private mansions was not long-lasting: the first apartment house to replace a private mansion on upper Fifth Avenue was 907 Fifth Avenue (1916), at 72nd Street, the neighborhood's grand carriage entrance to Central Park.

Most members of New York's upper-class families have made residences on the Upper East Side, including the oil-rich Rockefellers, political Roosevelts, political dynastic Kennedys, thoroughbred racing moneyed Whitneys, and tobacco and electric power fortuned Dukes.

Construction of the Third Avenue El, opened from 1878 in sections, followed by the Second Avenue El, opened in 1879, linked the Upper East Side's middle class and skilled artisans closely to the heart of the city, and confirmed the modest nature of the area to their east. The ghostly "Hamilton Square", which had appeared as one of the few genteel interruptions of the grid plan on city maps since the Commissioners' Plan of 1811, was intended to straddle what had now become the Harlem Railroad right-of-way between 66th and 69th Streets; it never materialized, though during the Panic of 1857 its unleveled ground was the scene of an open-air mass meeting called in July to agitate for the secession of the city and its neighboring counties from New York State, and the city divided its acreage into house lots and sold them. From the 1880s the neighborhood of Yorkville became a suburb of middle-class Germans.

Gracie Mansion, the last remaining suburban villa overlooking the East River at Carl Schurz Park, became the home of New York's mayor in 1942. The East River Drive, designed by Robert Moses, was extended south from the first section, from 125th Street to 92nd Street, which was completed in 1934 as a boulevard, an arterial highway running at street level; reconstruction designs from 1948 to 1966 converted FDR Drive, as it was renamed after Franklin Delano Roosevelt, into the full limited-access parkway that is in use today. 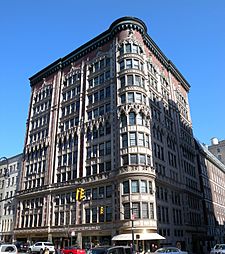 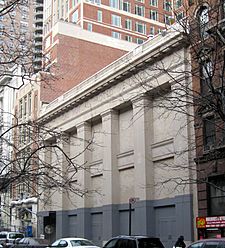 Demolishing the elevated railways on Third and Second Avenues opened these tenement-lined streets to the spotty construction of high-rise apartment blocks from the 1950s. However, it had an adverse effect on transportation, because the IRT Lexington Avenue Line was now the only subway line in the area. The construction of the Second Avenue Subway has brought up the price of houses in the Upper East Side somewhat.

Neighborhood boundaries in New York City are not officially set, but according to the Encyclopedia of New York City, the Upper East Side is bounded by 59th Street in the south, 96th Street on the north, Fifth Avenue to the west and the East River to the east. The AIA Guide to New York City extends the northern boundary to 106th Street near Fifth Avenue.

Some real estate agents use the term "Upper East Side" instead of "East Harlem" to describe areas that are slightly north of 96th Street and near Fifth Avenue, in order to avoid associating these areas with the negative connotations of the latter, a neighborhood which is generally perceived as less prestigious.

The Upper East Side Historic District is one of New York City’s largest districts, as is the neighborhood. This district runs from 59th to 78th Streets along Fifth Avenue, and up to 3rd Avenue at some points. In the decades after the Civil War, the once decrepit district transitioned into a thriving middle-class residential neighborhood. At the start of the 20th century, the neighborhood transformed again, but this time into a neighborhood of mansions and townhouses. As the century continued, and living environments altered, a lot of these single-family homes were replaced by lavish apartment buildings.

The entirety of Manhattan Community District 8, which comprises the Upper East Side and Roosevelt Island, had 225,914 inhabitants as of NYC Health's 2018 Community Health Profile, with an average life expectancy of 85.9 years. This is higher than the median life expectancy of 81.2 for all New York City neighborhoods. Most inhabitants are adults: a plurality (37%) are between the ages of 25–44, while 24% are between 45 and 64, and 20% are 65 or older. The ratio of youth and college-aged residents was lower, at 14% and 5% respectively.

As of the 2000 census, twenty-one percent of the population was foreign born; of this, 45.6% came from Europe, 29.5% from Asia, 16.2% from Latin America and 8.7% from other areas. The female-male ratio was very high with 125 females for 100 males. The Upper East Side contains a large and affluent Jewish population estimated at 56,000. Traditionally, the Upper East Side has been dominated by wealthy White Anglo-Saxon Protestant families.

Given its very high population density and per capita income ($85,081 in 2000), the neighborhood contains the greatest concentration of individual wealth in Manhattan. As of 2011, the median household income for the Upper East Side was $131,492. The Upper East Side maintains the highest pricing per square foot in the United States. A 2002 report cited the average cost per square meter as $8,856; however, that price has noticed a substantial jump, increasing to almost as much as $11,200 per square meter as of 2006. There are some buildings which cost about $125 per square foot (~$1345/㎡). The only public housing projects for those of low to moderate incomes on the Upper East Side are located just south of the neighborhood's northern limit at 96th Street, the Holmes Towers and Isaacs Houses. It borders East Harlem, which has the highest concentration of public housing in the United States.

The area is host to some of the most famous museums in the world. The string of museums along Fifth Avenue fronting Central Park has been dubbed "Museum Mile", running between 82nd and 105th Streets. It was once named "Millionaire's Row". The following are among the cultural institutions on the Upper East Side: 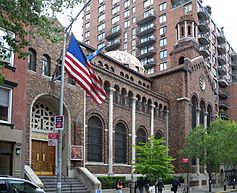 Archdiocesan Cathedral of the Holy Trinity 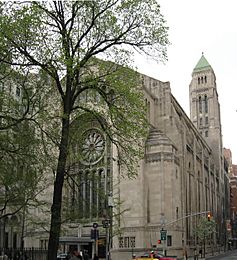 Many diplomatic missions are located in former mansions on the Upper East Side:

Other missions to the United Nations in the Upper East Side include:

The Second Avenue Line serves to relieve congestion on the Lexington Avenue Line. The first phase of the line opened on January 1, 2017, consisting of three stations in the Upper East Side: 96th Street, 86th Street, and 72nd Street. The planned Second Avenue Line includes three additional phases to be built at a later date, which will extend the line north to 125th Street/Park Avenue in Harlem and south to Hanover Square in the Financial District.

The Upper East Side has been a setting for many films, television shows, and other media. 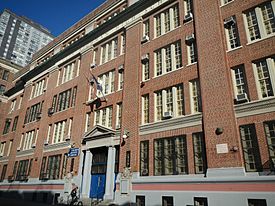 The New York City Department of Education operates public schools in the city. 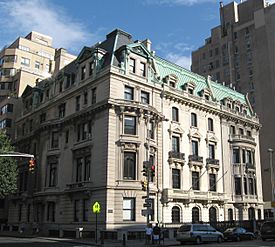 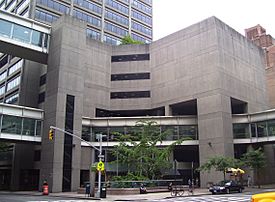 The West Building of Hunter College 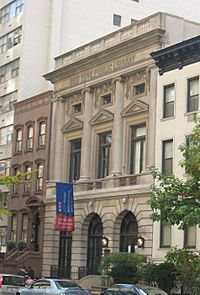 All content from Kiddle encyclopedia articles (including the article images and facts) can be freely used under Attribution-ShareAlike license, unless stated otherwise. Cite this article:
Upper East Side Facts for Kids. Kiddle Encyclopedia.