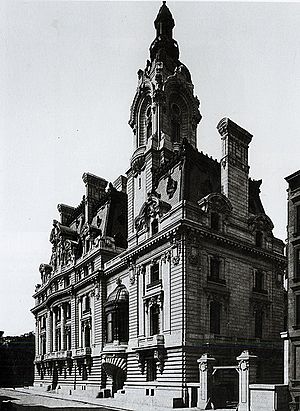 The William A. Clark House at 962 Fifth Avenue, which was torn down to build 960 Fifth Avenue

The new building was designed by Warren & Wetmore, who were responsible for Grand Central Terminal and the supervisory architects was Rosario Candela of Cross & Cross. Candela was "a 1920's architect known for grand flowing apartment layouts" who had a habit of cloistering bedroom wings away from the grand entertaining rooms. Dorothy Draper, the prominent interior decorator, was used as a consultant on the project. Campagna used Douglas L. Elliman & Co. as his broker for the sale of the coop apartments.

The building was started in 1927 and completed in 1928. Apartments average 14 to 17 rooms, with 8 maids' rooms, and is one of the few in New York with its own in-house restaurant. The original apartments were priced from $130,000 to $325,000 and more than 75 percent of the apartments were sold before the frame of the building was enclosed. The largest initial stockholder in the building was Dr. Preston Pope Satterwhite who reportedly paid $450,000 for his 20-room apartment, which was considered the most expensive cooperative sale ever paid at the time.

According to Hall Willkie, president of Brown Harris Stevens, the building, along with 820 Fifth Avenue and 834 Fifth Avenue, is one of the "three top buildings, in terms of size, quality of apartments, and price" on Fifth Avenue.

Dan Dorfman of The New York Sun referred to the building as "the pinnacle of New York luxury living" and stated that "some real estate experts consider it Manhattan's premier residential building."

In 2013, the 11 room apartment 10/11B, was listed for sale by Charles Lazarus, founder of Toys "R" Us, at $24.5 million after an initial listing of $29 million in 2011. It was eventually sold in 2014 to Carlos Rodriguez-Pastor, a Peruvian businessman who is the chairman of Interbank, for $21 million. This was believed to be the same apartment once owned by Dr. Satterwhite.

In 2014, the 16-room PHB apartment of Edgar Bronfman, Sr., former chairman of the Seagram Company who lived there for 40 years until his death in 2013, was listed for sale at $65 million. it was bought by Nassef Sawiris, the chief executive of Orascom Construction Industries and richest man in Egypt, for a reported $70 million, the then most expensive co-op in New York. It was the second most expensive coop sale in Manhattan in 2014 following the $71.3 million sale of a corner duplex at 740 Park Avenue to Israel Englander.

In 2017, the apartment of art dealer Robert H. Ellsworth and his partner Masahiro Hashiguchi, which encompassed the entire third floor, was sold to Carlos Alejandro Pérez Dávila, a Colombian financier (cousin of Alejandro Santo Domingo) whose family once controlled SABMiller, for $55 million. It was the most expensive coop sale in New York in 2017. The apartment was first owned by James H. Snowden in 1928 and was a duplex along with the fourth floor.

All content from Kiddle encyclopedia articles (including the article images and facts) can be freely used under Attribution-ShareAlike license, unless stated otherwise. Cite this article:
960 Fifth Avenue Facts for Kids. Kiddle Encyclopedia.