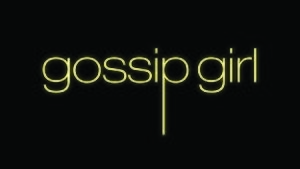 Gossip Girl is an American television teen drama based on the popular novel series of the same title written by Cecily von Ziegesar. Gossip Girl revolves around the lives of a group of rich teenagers grown up on New York's Upper East Side as they attend private school while dealing with typical teenage adolescent issues.

The series begins with Serena van der Woodsen' returning from a half-year at boarding school in Cornwall. "Gossip Girl" is the name of an anonymous blogger, who knows everything in Upper East Side but nobody knows who she is. Gossip Girl is voiced by Kristen Bell.

All content from Kiddle encyclopedia articles (including the article images and facts) can be freely used under Attribution-ShareAlike license, unless stated otherwise. Cite this article:
Gossip Girl Facts for Kids. Kiddle Encyclopedia.