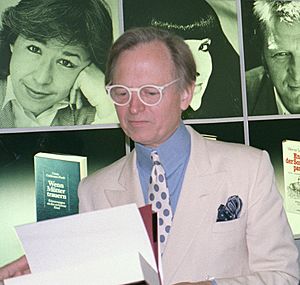 Wolfe best known for his work with and influence over the New Journalism literary movement. He began his career as a regional newspaper reporter in the 1950s, but achieved national fame in the 1960s following the publication of such best-selling books as The Electric Kool-Aid Acid Test and two collections of articles and essays, Radical Chic & Mau-Mauing the Flak Catchers and The Kandy-Kolored Tangerine-Flake Streamline Baby.

His first novel, The Bonfire of the Vanities, published in 1987, was met with critical acclaim, became a commercial success, and was adapted as a major movie (directed by Brian De Palma).

All content from Kiddle encyclopedia articles (including the article images and facts) can be freely used under Attribution-ShareAlike license, unless stated otherwise. Cite this article:
Tom Wolfe Facts for Kids. Kiddle Encyclopedia.