John Hoyer Updike (March 18, 1932 – January 27, 2009) was an American novelist, poet, short-story writer, art critic, and literary critic. One of only three writers to win the Pulitzer Prize for Fiction more than once. Updike published more than twenty novels, more than a dozen short-story collections, as well as poetry, art and literary criticism and children's books during his career.

Hundreds of his stories, reviews, and poems appeared in The New Yorker starting in 1954. He also wrote regularly for The New York Review of Books. His most famous work is his "Rabbit" series (the novels Rabbit, Run; Rabbit Redux; Rabbit Is Rich; Rabbit at Rest; and the novella Rabbit Remembered), which chronicles the life of the middle-class everyman Harry "Rabbit" Angstrom over the course of several decades, from young adulthood to death. Both Rabbit Is Rich (1982) and Rabbit at Rest (1990) were recognized with the Pulitzer Prize.

Updike is considered one of the greatest American fiction writers of his generation. He was widely praised as America's "last true man of letters", with an immense and far-reaching influence on many writers. The excellence of his prose style is acknowledged even by critics skeptical of other aspects of Updike's work. 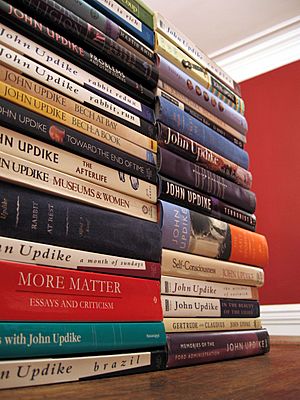 Updike was born in Reading, Pennsylvania, the only child of Linda Grace (née Hoyer) and Wesley Russell Updike, and was raised in the nearby small town of Shillington. The family later moved to the unincorporated village of Plowville. His mother's attempts to become a published writer impressed the young Updike. "One of my earliest memories", he later recalled, "is of seeing her at her desk... I admired the writer's equipment, the typewriter eraser, the boxes of clean paper. And I remember the brown envelopes that stories would go off in—and come back in." These early years in Berks County, Pennsylvania, would influence the environment of the Rabbit Angstrom stories, as well as many of his early novels and short stories.

Upon graduation, Updike attended the Ruskin School of Drawing and Fine Art at the University of Oxford with the ambition of becoming a cartoonist. After returning to the United States, Updike and his family moved to New York, where he became a regular contributor to The New Yorker. This was the beginning of his professional writing career.

Updike married Mary E. Pennington, an art student at Radcliffe College, in 1953, while he was still a student at Harvard. She accompanied him to Oxford, England, where he attended art school and where their first child was born in 1955. The couple had three more children together. They divorced in 1974. Updike had seven grandsons.

In 1977 Updike married Martha Ruggles Bernhard, with whom he lived for more than thirty years in Beverly Farms, Massachusetts. He died of lung cancer at a hospice in Danvers, Massachusetts, on January 27, 2009, at the age of 76.

All content from Kiddle encyclopedia articles (including the article images and facts) can be freely used under Attribution-ShareAlike license, unless stated otherwise. Cite this article:
John Updike Facts for Kids. Kiddle Encyclopedia.