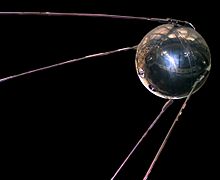 The Soviet Union achieved an early lead in the Space Race by launching the first artificial satellite Sputnik 1 (replica shown) in 1957. 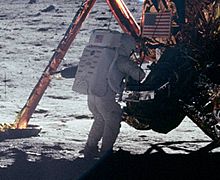 The United States led during the "Moon race" by landing Neil Armstrong (pictured) and Buzz Aldrin on the Moon, July 20, 1969. 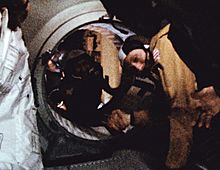 The Space Race was a competition of space exploration between the Soviet Union and the United States, which lasted from 1957 to 1969. It had to do with the efforts to explore outer space with artificial satellites, to send humans into space, and to land them on the Moon.

The Space Race began after the Soviet launch of Sputnik 1 on 4 October 1957. The term "Space Race" started as a comparison to the arms race. The Space Race became an important part of the rivalry between the United States and the Soviet Union during the Cold War. Space technology became an extra important area in this rivalry, because of possible military uses.

On 4 October 1957, the Soviet Union launched Sputnik 1, the first artificial satellite to enter the Earth's orbit. This started the Space Race.

One part of the space race was the race to put a man into space. This first was won by the Soviet Union when Major Yuri Gagarin orbited the earth on 12 April 1961.

First Men on the Moon

On May 25 1961, in a speech to a joint sitting of congress, President John F Kennedy of the United States of America set the impossible goal of landing a man on the Moon by the end of the decade. This also implied a challenge to the Russians to try to do it first. The Americans won this part of the race in 1969 when Neil Armstrong and Buzz Aldrin landed on the Moon and returned safely to the Earth.

All content from Kiddle encyclopedia articles (including the article images and facts) can be freely used under Attribution-ShareAlike license, unless stated otherwise. Cite this article:
Space Race Facts for Kids. Kiddle Encyclopedia.